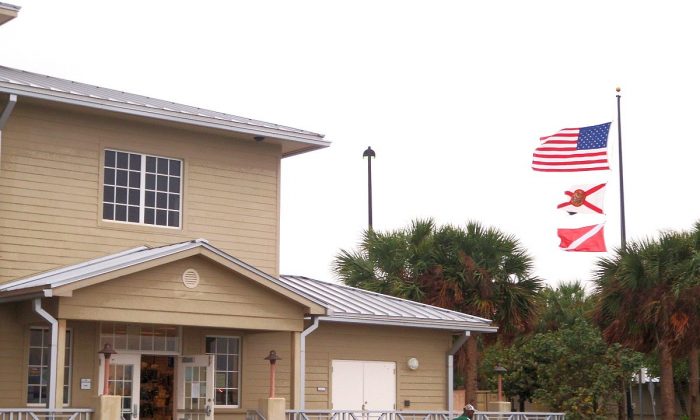 Diving the Palm Beaches: Three Generations in One Family Show Off Its Underwater Beauty

Mansions of the super rich dot the shores of Palm Beach. Some form landmarks for dive boat captains. Sites are named for famous places like Bath and Tennis about a mile offshore from Palm Beach Bath and Tennis Club reserved for wealthy scions in America. Meriwether Post, of the Post Cereal fortune, built Mar a Largo and entertained the worldâ€™s richest in great style. She would fly in square dance bands and callers for weekend dances at the mansion. There is no limit to wealth evidenced by mega-yachts tied to docks along Palm Beach’s Intracoastal Waterway called Lake Worth in this area.

Many jokes are traditional among divers off the Palm Beaches. When a freighter came ashore and landed in socialite Molly Wilmot’s yard it became a major attraction. The freighter, “Mercedes,” was eventually towed off and sunk as an artificial reef in neighboring Ft. Lauderdale 35 miles to the south. Not to be outdone, a Palm Beach millionaire sank his Rolls Royce offshore. There was a proclamation among divers, “Ft. Lauderdale has its Mercedes, Palm Beach has its Rolls Royce.”

Any area that attracts super-wealthy as well as millions of tourists every year is bound to support the arts. West Palm Beach is the county seat for Palm Beach County. It is one of the largest counties in the U.S. stretching from the Atlantic Ocean more than fifty miles west to orchards, ranches, equestrian centers and lakes. The City of West Palm Beach boasts many attractions. Kravis Center offers concerts, ballet, theatrical productions and seasonal headliners that perform on its stages. Nearby, City Place is a marketplace, mall and fine dining venue. World-class entertainment at Kravis Center is complemented by fine dining. Restaurants abound in the area and offer everything from franchise food to elegant dining and dancing at the Breakers Hotel. Downtown West Palm Beach’s Clemitis Street has become a popular inner-city attraction.

Directly offshore of the Breakers Hotel is a majestic reef captains divide in two, North and South Breakers. Nearby the Double Ledge offers Gulf Stream diving at its best.

Just north of Palm Beach, within view of Peanut Island, a family of divers with a group of good friends and partners, opened a modern dive shop, kayak, paddle board rental facility and full service dive operation.

Little Deeper Dive Charters is a family operation in every sense. Captain David Brown and his wife Lynn operate a dive boat out of the Palm Beach County Marina in Phil Foster Park at the east side of the Blue Heron Bridge. This former U.S. Coastguardsman and his family are all avid divers. It was natural that when he left the world of construction and engineering, after his military service, he would look toward the ocean for his new vocation.

David bought a dive boat in Boynton Beach, Florida. It required a lot of repairs. Eventually he had to replace both engines. After a slow start a couple of years ago the Brown family got Little Deeper ship shape and operational as one of south Floridaâ€™s premiere dive vessels.

“We had a long application process with the county. Finally we were accepted as concessionaire. It is a beautiful marina with grass, picnic tables, clean and well serviced bathrooms,” David said. They are in partnership with Peter Friedman and Christy Campbell, both diving instructors, owners of Stuart Scuba in Stuart, Florida. Peter and Christy operate two other dive boats out of Jupiter, Florida about fifteen miles north of the Blue Heron Bridge.

“As concessionaire we are the first and only dive boat operating out of Phil Foster Park,” Lynn added with her good-natured laugh.

Lynn’s son Jason Landau is also a captain and divemaster. Their grandson Allan is an avid diver. Al takes his hand spear below on most dives to help rid the offshore reefs of lionfish. The invasive species has wiped out many reef fish with voracious appetite. Lionfish are indigenous to the Pacific and Indian Oceans and have likely arrived in South Florida’s Atlantic waters as the result of aquarists dumping unwanted fish into the ocean and ships dumping ballast water.

“Are you going to fillet all of those?” A diver asked Al as he insured that the venomous spines were all properly cut off the fish before placing them into another catch bag upon surfacing from his dive. He would and did since the white meat of the lionfish is a delicacy. It is one way the family joins efforts of conservationists to try to reverse the population explosion of lionfish in the area.

Lynn checks divers in inside the new dive shop, Blue Heron Bridge Scuba and Watersports, opened as a concession at the marina. Jason and other members of the crew bring a cart to the parking lot where divers gear is loaded and taken to the boat. It is a convenient way to drive in, have heavy equipment attended to, then find a spot to park. There is ample free parking at the county park and marina and as concessionaires special spots have been set aside for Little Deeper Charter divers, a great benefit on crowded weekends at the park.

Once aboard Little Deeper, David, Jason or a crew member gives a complete boat briefing. While many divers have been on the boat before it is always good to hear a review of safety equipment aboard and learn what a day on the ocean offers. It is a short run south under the Blue Heron Bridge to Palm Beach Inlet and out into the Atlantic Ocean.

There are many sites to dive off the Palm Beaches. Derelict ships have been sunk by the county as artificial reefs. These shipwrecks afford habitat for fish and attaching marine life. On a clear day underwater, when visibility is a hundred feet and more, the shipwrecks stand out as veritable bastions of life.

Sharks prowl the depths and Goliath groupers abound. Reef fish dart in and out and the ancient ships have hulls festooned with colorful corals and sponges.

When we first descended, following Jason and his son Al below, a bull shark was cruising past one of the sunken ships. Unlike the concept put forth by films like “Jaws,” most sharks are shy underwater. They usually flee in the presence of divers making it difficult to get close to them to take a picture. Nearby a small nurse shark seemed nonplussed by our presence. It swam in and around the shipwreck letting underwater photographers approach to take its picture.

There are four shipwrecks grouped in the area. Jason took a reel with a reef hook below. Since the Gulf Stream meanders in just offshore, divers do what is called a drift dive. The line has a float with a dive flag attached to it on the surface. The captain gets on site and divers jump in. Davidâ€™s booming voice instructs them to: Dive, Dive, Dive from the bridge of Little Deeper.

Divers remain with Jason and the flag. They can go in their own buddy teams with another flag or with a “sausage.” If they get separated from the group, dally to take pictures or wish to go on their own they come back to the surface and inflate their safety sausage, which is usually eye catching neon orange, so the captain can pick them up.

We visited all four of the shipwrecks and swam away from the hulls to rubble piles nearby. These concrete and rock structures have also been placed on the bottom by the Palm Beach County artificial reef project. The structures provide habitat for juveniles as well as spawning areas for fish and crustaceans. They are substrate for corals and sponges as well.

Jason hooked the flag line into a plate of steel of one of the shipwrecks. The mall nurse shark was swimming around them. Likely it was attracted to Al’s bag of lionfish. He wasn’t about to part with any of the delicacies he intended to prepare for dinner. The small nurse shark learned that divers spear lionfish and often leave them on the reef for it to devour.

This was fun. Divers and underwater photographers formed a circle to watch the nurse shark swimming around them. Cameras captured the action as the small shark cavorted among them checking each out in turn. We watched the antics until it was time to surface along the flag line, do a safety stop and return to the surface to be picked up by the dive boat.

Back on board divers had their stories to tell. Al took fresh sliced orange from the ice chest and passed it around. Jason briefed us on the second dive. It was to be on Nunn’s Reef. The first dive was at 90 feet, the second was to be at about 80 feet. Therefore an hour surface interval was taken between the dives.

Nunnâ’s Reef has a low ledge that gives off westward into the sand. There are coral heads and niches everywhere that offer the chance to observe reef life. The northward flowing Gulf Stream current was slight. I took pictures of Al spearing lionfish. He used medical shears to cut off the venomous spines then popped them in his catch bag.

A loggerhead turtle swam by. I took its photo and watched as it swam peacefully along the reef. The waters off South Florida beaches are popular mating grounds for marine turtles. They begin to arrive offshore in December, mate throughout the winter months, then females swim ashore, dig holes in the sand and deposit their eggs on the beaches.

After millions of tax money is wasted putting ocean sand back on beaches, it is removed again by storms. The silt caused by these projects covers offshore reefs. The noise, lights and constant dredging disrupts turtle behavior. Beaches become hazards to species that are already menaced with extinction.

It was heart warming to see this loggerhead turtle return to offshore waters, pose for a picture then swim off in search of a mate. The reef offered many opportunities to photograph moray eels and reef fish. The ocean was a warm 77 F and visibility was about 50 feet.

We surfaced, were picked up by Little Deeper, then motored back through the Palm Beach Inlet. The former U.S. Coast Guard station, where President Kennedy’s bunker is preserved, on Peanut Island is located near the inlet. Back at the marina the crew offloaded our gear. We rinsed it, took hot showers and bid farewell to this family of divers that enjoy the underwater world as much as their guests.

For more information visit their website at www.littledeepercharters.com or call them at 561 436 5299. Blue Heron Bridge Scuba and Watersports can be reached at 561 839 5130 or visit www.blueheronbridgescuba.com.