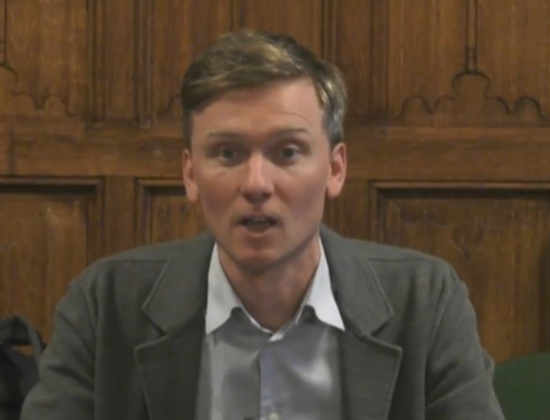 Torsten Bell, director of the Resolution Foundation talks to MPs in the House of Commons on Jan. 31, 2022. (Parliament TV)
UK

The Government should not be raising national insurance during the cost of living crisis, economists have told MPs.

Giving evidence to the Treasury Select Committee, Tom Clougherty, from the Centre for Policy Studies, said it was “extremely perverse” to raise the tax currently and it should be delayed.

Torsten Bell, from the Resolution Foundation, said the Government should raise income tax instead of national insurance – and warned lower-income households are going to feel the squeeze harder than others.

Clougherty said it was “extremely perverse to raise taxes on ordinary earners in the middle of a cost of living crisis”.

Bell said that “all sensible people” think income tax rates should have been increased by the Government, instead of the controversial national insurance rise.

He added: “More than 50 percent of the savings from the National Insurance delay would go to the top 20 percent and it’s the bottom 20 percent whose energy bills are about to get hammered, so that isn’t a good policy given the world you find yourself in.

The economist explained: “I think it’s going to be a pretty tough year and the whole country is going to feel squeezed in 2022 and lower income households are going to struggle most with that.”

Robert Joyce, the deputy director at the Institute for Fiscal Studies, also told MPs that “in April specifically there will be pain for everyone” regardless of income, but that those on lower incomes would suffer more.

Their comments come as the committee looks at how the economy is set to fare in coming months with the looming hike in energy bills.

Regulator Ofgem will announce the next rise for the Government’s price cap in February, which will come into effect in April.

Analysts are predicting it could rise by as much as 50 percent due to sky-high global gas prices and think-tanks have called on the Government to intervene.

The rises have also impacted inflation, which the panellists said was far higher than first thought.

The Office for National Statistics (ONS) reported the highest year-on-year inflation level for 30 years for December 2021 at 5.4 percent.

Bell said it had risen faster than “any of us broadly expected”.

He added: “The OBR (Office for Budget Responsibility) was expecting 4.5% to be the peak as recently as October and we are heading to high sixes, more than likely 6.5% as the peak of inflation.

“What is sitting behind that is two big things, what’s happening to hydrocarbons and particularly gas prices and what that does to the cost energy and to the input in lots of other production.

“And then the global reopening of the economy, particularly focused on the demand for goods running up against supply constraints and the two together are particularly leading to high inflation rates.”

The economist also pointed out that high energy bills are also likely to push inflation even higher.

Clougherty said he did not believe that the current high rates of inflation would be persistent, but that there is a risk of it remaining high if there is another wave of coronavirus.