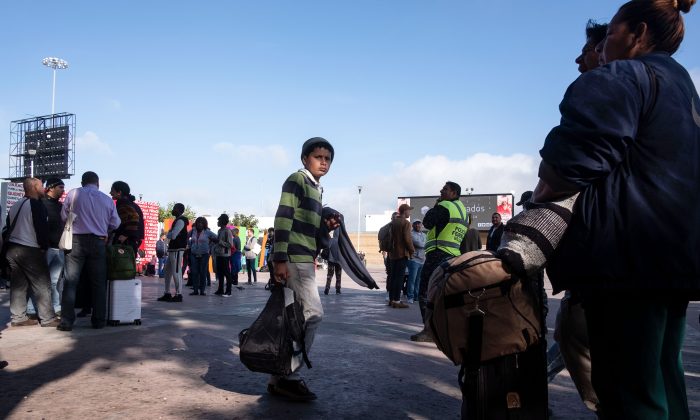 Asylum seekers wait for their turn to request asylum to US authorities outside El Chaparral port of entry in Tijuana, Baja California state, Mexico, on April 9, 2019. (Guillermo Arias/AFP/Getty Images)
US News

A federal judge this week temporarily halted the Trump administration’s program forcing asylum-seekers at the southern border to wait in Mexico while their claims are processed.

San Francisco-based U.S. District Judge Richard Seeborg, who was appointed by former President Barack Obama, on April 8 ordered that the Department of Homeland Security (DHS) policies known as the “Migrant Protection Protocols” be suspended as of April 12 at 5 p.m. Pacific time. The policies are aimed, among other things, at slowing the flow of Central American caravans and the migrants who accompany them into the United States.

In mid-March, The Washington Post reported that as many as 240 would-be asylees had shown up at the U.S. border and been returned to Mexico since the policy began to be enforced at the beginning of the year.

A group of 11 plaintiffs who attempted to enter the country at the San Ysidro crossing in California sued to halt the asylum claim-processing practice. Since the suit was filed, the government extended the policy to the points of entry in Calexico, California, and El Paso, Texas, and planned to extend it to other border crossings as well. The official overseeing the policy, Homeland Security Secretary Kirstjen Nielsen, resigned April 7.

The White House blasted Judge Seeborg’s ruling, vowing that President Donald Trump “will do whatever it takes” to protect Americans.

White House press secretary Sarah Huckabee Sanders wrote on Twitter that a “liberal activist judge in San Francisco ruled the United States and Mexico can’t work together to address asylum issues at the border.” Sanders also said it was “sad” that Mexico was now doing more to secure the border than Democratic lawmakers on Capitol Hill.

Seeborg issued what is called a “non-party,” or nationwide injunction (sometimes called a universal injunction) that reaches beyond the confines of the case before the court. Critics say such sweeping restraining orders allow unelected judges to function as lawmakers and, in effect, veto presidential directives.

In the court case, known as Innovation Law Lab v. Nielsen, Seeborg acknowledged there is “a growing uncertainty about the propriety of universal injunctions” and that the government had asked “that any injunction be limited in geographical scope.”

But the judge refused to exercise such judicial restraint, reasoning that federal district courts such as his have the authority “to enjoin unlawful policies on a universal basis,” and there was a “need for uniformity in immigration policy.” Seeborg also wrote that a nationwide injunction “was necessary to give Plaintiffs a full expression of their rights.”

“Although issues sometimes arise when a ruling in a single judicial district is applied nationwide, defendants have not shown the injunction in this case can be limited geographically.”

Seeborg denied the Trump administration’s request to stay his order pending appeal to a higher court, but indicated it wouldn’t become effective until the close of business April 12 “[t]o permit defendants to exercise their right to seek a stay from the Court of Appeal[.]”

The government will still have the power to detain any of the plaintiffs in the lawsuit “at the border for admission … pending adjudication of his or her admission application,” the judge wrote.

Judge Seeborg has caused other problems for the Trump administration. In March, he ruled that Commerce Secretary Wilbur Ross’ insertion of a citizenship question on the 2020 Census violated the Administrative Procedure Act and was unconstitutional.

Other judges have ruled against the question and later this month, the Supreme Court will hear oral arguments in an expedited review of a New York judge’s ruling blocking the Trump administration’s decision to include the question.

Census results are important because they are used to allocate federal dollars and determine representation in Congress, among other things. Because time is of the essence—the census questionnaires need to be printed in coming months—the Supreme Court allowed the administration to skip the normal judicial appeal route and permitted a direct appeal.

The lawsuit was initiated by 18 states, 15 cities, and civil-rights groups including the American Civil Liberties Union. They claim the administration wants to add the citizenship question to intimidate Latinos and illegal aliens into not completing the form, and that this would disproportionately affect congressional representation for Democratic-leaning states with large illegal alien populations. According to one estimate, non-citizens make up about 7 percent of those who reside in the United States.