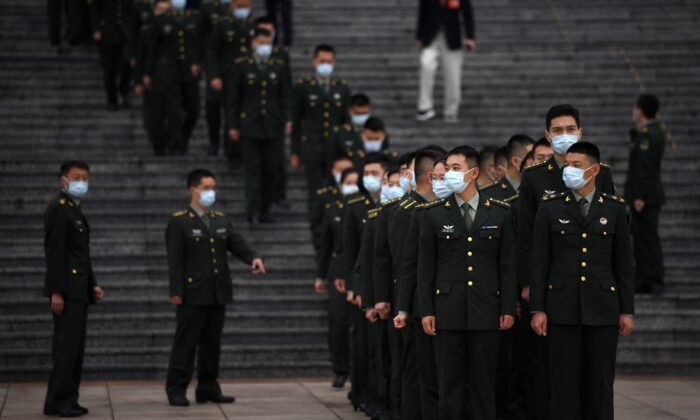 Military delegates stand in formation at the Great Hall of the People in Beijing on Oct. 9, 2021. (Noel Celis/AFP via Getty Images)
US-China Relations

Dorothy Li
Dorothy Li is a reporter for The Epoch Times based in Europe.
View profile
Follow
and Joshua Philipp

As tanks and troops pour into Ukraine, the United States and its allies shift their attention to Russia. But experts warn that China, whose ruling communist party has captured U.S. elites, is still focusing on supplanting the United States, leader of the free world.

“The Russia-Ukraine war is a distraction because even the U.S. intelligence community’s 2022 threat assessment identifies China as the number one existential threat to the United States,” said Stu Cvrk, an analyst and retired U.S. Navy captain.

Speaking at a webinar hosted by EpochTV’s “Unmasking Communist China,” Cvrk, a contributor to The Epoch Times, noted the United States is not “really doing much to counter that threat in terms of deterrence and preparations.”

Cvrk was referring to a report released on March 8 by the Office of the Director of National Intelligence. The document stated the Chinese Communist Party (CCP) will continue its efforts to challenge the United State’s position as a world leader economically, technologically, and militarily.

“Beijing is accelerating the development of key capabilities it believes the People’s Liberation Army’s (PLA) needs to confront the United States in a large-scale, sustained conflict,” read the 31-page report.

Director of National Intelligence Avril Haines reiterated the report’s findings during a House Intelligence Committee hearing that Beijing “is coming ever closer to becoming a peer competitor in areas of relevance to national security.”

“The Chinese are deploying hydrogen hypersonic weapons, both in space and from their ships and aircraft,” Cvrk, also a contributor to The Epoch Times, said at the online event. “What do we have in that respect? Zero.”

The United States shouldn’t lose sight of the big picture during Russia’s invasion of Ukraine, according to Cvrk.

“They don’t want us to get excited,” said Lailari, who is now conducting research at the National Chengchi University in Taipei as a Taiwan fellow.

“When we’re least prepared, they will strike. We will have no ability to do anything or, if we do have any ability, it will be very limited.”

Elites ‘Building Up’ the Threat

The Chinese regime, which declared a “no limit” friendship with Russia before the war in Ukraine, has officially presented itself as a neutral party and called for negotiations to resolve the crisis.

But the regime in Beijing has also blamed Washington and NATO for instigating the conflict and asked Western countries to respect Moscow’s “legitimate security concerns.”

It has refused to characterize Russia’s actions as an invasion and refrained from condemning it, despite growing calls from the United States and its allies.

“I think what we’re watching here is a stage-managed process primarily for public consumption, a total reshaping of the world order,” said Newman.

He said the CCP wouldn’t have been able to achieve its current status without leveraging close ties with members of the U.S. elite.

“I don’t think you can understand the actions of the Communist Chinese Party, without understanding that the very, very powerful elites in the United States … were involved in building up Communist China, and those relationships are still there,” said Newman.

CCP has co-opted many U.S. elites in Washington, Wall Street, Silicon Valley, and corporate titans to influence and undermine America without direct conflicts, author Peter Schweizer said in a recent interview with The Epoch Times.

The ultimate goal of the communist regime in China is to replace the United States as the world’s top superpower, according to Schweizer, who recently released his new book, “Red-Handed: How American Elites Get Rich Helping China Win.”

The book “shed some much-needed light,” Newman said at the online event.

“The Communist Chinese is a major threat to humanity, to freedom, and to the United States,” said Newman. “But without the deliberate assistance of people in Washington, DC and people in New York, that never would have happened.”

“So we need to get to the bottom of the mess in our country before taking action in other places,” he said.