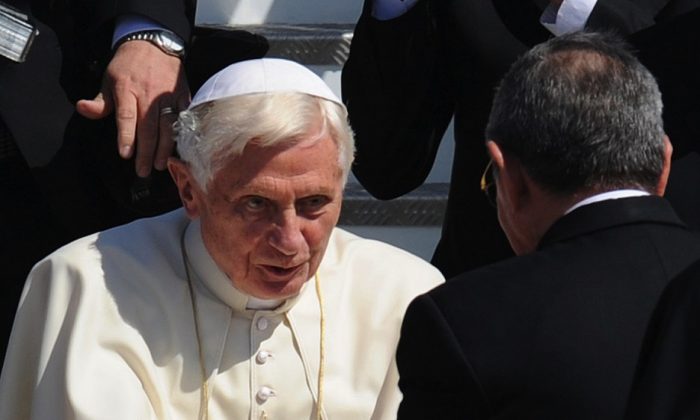 Pope Benedict XVI arrived in Cuba on Monday; the first time a pontiff has done so since Pope John Paul II’s visit in 1997.

Protesters and dissidents have been told to stay away from the pope’s Masses in Havana and in Santiago de Cuba during this three-day trip.

Things in Cuba likely won’t change any time soon, says Jorge Olivera Castillo, a dissident with the Union of Independent Writers from Cuba who was arrested during Cuba’s Black Spring crackdown in 2003.

Castillo said in a telephone interview on Saturday, “You cannot expect much” from the Pope’s visit in terms of bringing change to Cuba. On Monday he communicated via email and said he and other dissidents and independent journalists have had their phones cut of by the authorities.

Castillo pointed out that when Pope John Paul II visited the country 15 years ago, it had no impact on improving human rights.

“Five years later,” he added, “the Black Spring happened. I was one of those who was sent to prison, one of the 75 arrested at that time.”

The Black Spring, as it was dubbed, took place in 2003 when Cuba cracked down heavily on dissidents, including journalists, librarians, human rights activists, democracy activists, and others.

“I do not see the Catholic Church as one of the main drivers of change in Cuba,” he said, despite that the Church has provided humanitarian aid in the country. “I think the Church has promoted its relations with the government and has not established a harmony, a balance with the other side: the side of the people,” Castillo added.

On one level, he said that the pope’s visit could provide a sort of morale boost to the Catholics in Cuba, but the visit is a double-edged sword.

The Vatican “a few days ago issued a statement condemning the U.S. embargo,” he continued. At the same time, they offered “no word on the gross and systematic human rights violations” taking place in the country.

According to independent economist Oscar Espinosa Chepe, “The government remains a totalitarian regime, their economic, social, and political situation is very difficult because they rely on repression,” he said in an email on Monday.

Chepe is currently on medical parole. He was sentenced to 20 years in jail in 2003 following the Black Spring. “The government can return me to prison at any time,” he wrote.