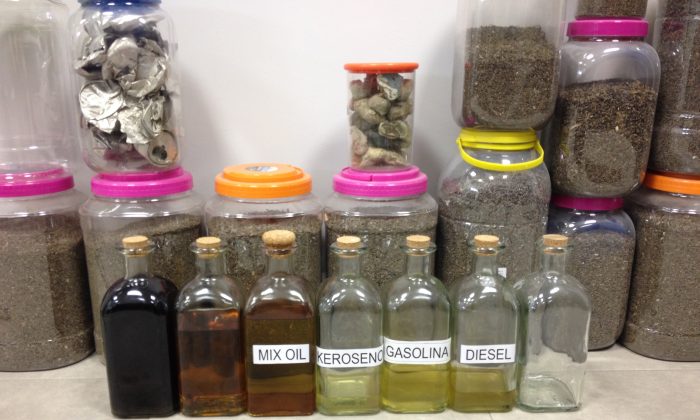 Sustane Technologies’ distruptive technology is able to separate metal, plastic, and biomass materials from garbage to create viable recycling and fuel products, including pyrolized plastics that can be burned with diesel and in other combustion engines. (Courtesy Sustane Technologies)
Canada

Peter Vinall has risked much to build a business that could be the solution to the world’s garbage problem.

The engineer and businessman in him knew the technology was viable, but putting his retirement savings on the line wasn’t easy. Sometimes his wife wondered if maybe he wasn’t risking too much.

But now the federal government and an angel investor are on board and taking the bet with him. It’s not much of a risk, really—the technology is proven and revolutionary.

It’s sorting the plastic from the organic material that is revolutionary.

“It feels great now,” said Vinall. “I know there is going to be even more work, but I think we are building something that is pretty special, so that is really exciting.”

Vinall and his partner, Spanish inventor Javier De La Fuente, are commercializing technology that takes the ugly remains left behind from recycling and composting programs and separates it into metal, plastic, an inorganic aggregate, and—most importantly—biomass pellets.

It’s a level of separation never before possible in a commercially viable way and offers a solution to the landfill conundrum. Currently only that inorganic aggregate would go to the landfill, an inert mix of glass and sand that Vinall expects will one day be used by construction companies building roads and the like.

At the moment though, that waste is a fraction of the current tonnage heading to landfills and doesn’t pose the kind of off-gassing and greenhouse gas emitting problems of the mixed garbage currently getting dumped and buried.

On April 7, the federal government announced a $500,000 loan for Vinall’s company, Sustane Technologies Inc., that will help it buy special equipment to build the guts of its garbage processing plant: the machine that makes the magic happen. That will make it much easier for the company to get the $14 million or so it needs from investors to build the rest of the plant and infrastructure.

Sustane has already proven its technology in a large-scale pilot program. This next step proves it on a commercial scale to the tune of 200 tonnes a day of trash from the Municipality of the District of Chester in Nova Scotia, where the plant will be built.

It’s sorting the plastic from the organic material that is revolutionary. This makes two viable products from one giant mess. The pellets can be burned without needing the kinds of $200-million incinerators that were thought to be a solution to landfills a few decades ago. That technology proved too expensive and controversial. Burning plastic is catnip to NIMBY movements.

Until the federal government announced its loan, Sustane had flown under the radar. Vinall has done his best to keep his technology secret. The biggest risk he faces is someone stealing the technology and commercializing it ahead of him. He has patents on some of it, but like KFC and Coca Cola, he is keeping the secret recipe under wraps. Patents can make it easier to sue infringers, but they force inventors to publicly disclose their trade secrets.

“We’ll be very careful about how much detail we will expose,” he said.

Sustane is working with an IP expert to figure out a long-term solution to that dilemma, and Vinall is reluctant to talk about how he will market the technology while also keeping its core secrets under wraps.

Australian-born Vinall spent 35 years in the often turbulent pulp and paper industry and was president and CEO of Fortress Paper Ltd.’s specialty cellulose division from 2010 to 2013. Before that, he led AV Group, which owns two mills in New Brunswick. Now living in Vancouver, he had a successful consultancy before De La Fuente’s groundbreaking technology to separate garbage captured his imagination.

Vinall describes De La Fuente as a pure inventor, the kind of artistic genius better at creating things than making money off of them. Vinall brings the business background and enough engineering knowhow to be confident the technology works and can be profitable.

It’s been difficult though, he said. Two years without an income, watching his savings melt away, working constantly. “The life of an entrepreneur is a tough one.”

Getting two $50,000 grants, one from the feds and the other from the province of Nova Scotia, were essential in the earlier stages, he said. He and De La Fuente had always planned to go as far as possible without investors. When they got to that point, an angel investor came on board.

Turning Garbage into a Commodity

Sustane’s technology is disruptive. Total garbage solutions in the past were largely limited to incinerators that burned all waste.

By managing to separate the plastic and metal and creating biomass pellets of high purity that burn like dry wood, Sustane creates an in-demand commodity from garbage. Bits of paper and food scraps turn into energy—and money.

The whole process is cheap and in vague terms works by cooking the garbage to a slurry that includes clumps of metal and plastic and then separating out the metal, plastic, biomass, and moisture. Sand, glass, and inorganic remains are the bi-product.

Sustane makes its money by charging municipalities for the service of gobbling up 90 percent of its wastestream and also selling plastic, metal, and biomass pellets. It’s a cost savings for municipalities, which pay $100 a tonne to deal with garbage.

Vinall is excited about Sustane’s prospects. He said there is nothing on the market today that can match the technology. Today it’s Nova Scotia, tomorrow the world, he hopes.