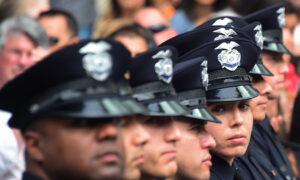 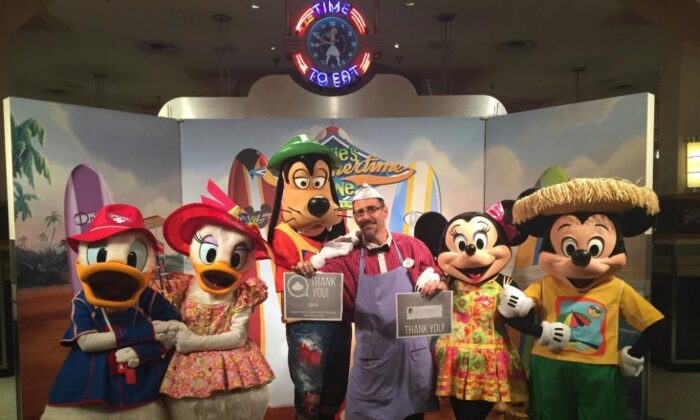 Nick Caturano, a 16-year employee at Disney World in Orlando, Fa, poses with a number of Disney characters at a recent event. (Courtesy of Nick Caturano)
Companies

Florida resident Nick Caturano loves his job working as a restaurant server at Disney World in Orlando, Florida—and he wants to keep it.

But unless he complies with the corporate giant’s COVID-19 vaccination mandate next month, Caturano may have to bid farewell to “The Most Magical Place on Earth.”

“I was originally going to walk away from it and move on,” Caturano told The Epoch Times. Now “I just feel a sense of responsibility to stand up and fight.”

Caturano, 52, has taken his fight online at goofyvaccine.com, where he is asking Disney “to not mandate” the vaccine for union employees like himself. He’s also asking others to join the fight against mandated vaccinations.

“This is about everybody. It’s about the whole country right now,” he said, and if people don’t stand up now, he said, “they won’t have another chance, and I think they’re going to regret it.”

“We knew the union wasn’t going to fight it,” Caturano said. “They were going to hammer out the medical and religious exemptions. The union feels they have the right to do what they want.”

In an Aug. 23 Memorandum of Understanding between Walt Disney Parks and Resorts U.S. and the Services Trades Council Union, Disney World will require that all 77,000 employees be fully vaccinated by Oct. 22.

The agreement, however, will allow exemptions due to a physical disability, medical condition, or “sincerely held religious belief, practice or observance,” the memorandum states.

The memorandum also states that Disney will engage in a “flexible interactive process with the employee to understand their circumstances, and determine whether there are reasonable accommodations in their current role on a case-by-case basis.”

“Reasonable accommodations could include face coverings, other additional safety protocols, or alternative open roles, but these determinations will be made based on the employee’s specific circumstances.”

Caturano said that private companies don’t have the right to require vaccines for their employees without their approval or consent, given that other treatments are available.

In early August, both he and his wife came down with COVID-19, and they both made a full recovery after taking Ivermectin, he said.

As a Christian, Caturano said he opposes the COVID-19 vaccines based on his faith and the doubts he has over the safety and effectiveness of the shots.

“I have a sincerely held religious belief against it. There’s no reason for me to get a COVID shot when I have a healthy immune system,” he said.

“It’s unbelievably scary that this could ever happen,” Caturano said of Disney’s vaccination mandate. “Everybody is so scared—literally.”

Another restaurant server at Disney World, who spoke on condition of anonymity, said she’s afraid to lose her job after 30 years, being her family’s sole breadwinner.

“I don’t want to lose my job. I don’t know what to do,” she told The Epoch Times. “I don’t see how Disney can even get away with this.”

The employee, 55, said she believes her fellow workers should have the choice whether or not to take the injection.

“If it’s my choice, it’s my choice,” she said. “I don’t know how much I can fight and not lose my job. Most of the people I work with have already been vaccinated.”

A fully vaccinated server at Disney World, who spoke on condition of anonymity, said that workers have a constitutional right to make their own medical decisions, free of coercion by their employer.

“What kills me is whoever is opposed to [the vaccines on social media] is taken down. It is being censored,” she told The Epoch Times.

“All night long—horrible pain. It’s like death. [But] it was my choice. I was pressured into it,” she said.