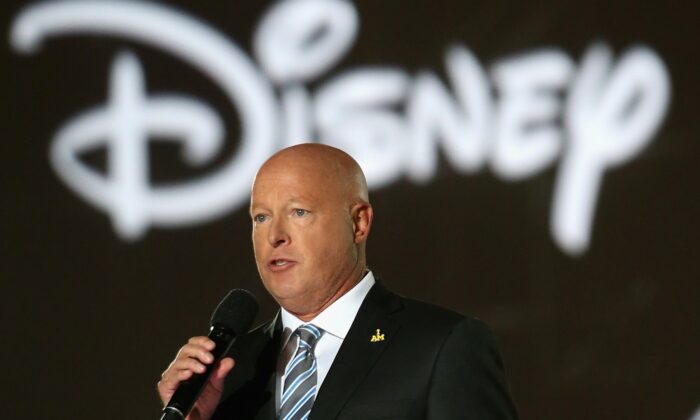 Bob Chapek of Disney talks during the Opening Ceremony of the Invictus Games Orlando 2016 at ESPN Wide World of Sports in Orlando, Fla., on May 8, 2016. (Chris Jackson/Getty Images for Invictus)
Companies

Walden was promoted to Chairman of Disney’s General Entertainment Content, where she will lead the company’s streaming television efforts.

“Dana is a dynamic, collaborative leader and cultural force who in just three years has transformed our television business into a content powerhouse that consistently delivers the entertainment audiences crave,” Chapek said.

Walden said the new position was an “incredible honor” and that she was “humbled” to lead the new team.

“I am confident that together, we will continue to build on the foundation of culture-defining entertainment we have achieved so far,” Walden said.

Both Walden and Rice joined Disney in 2019 when the company acquired entertainment assets from 21st Century Fox. It is unclear why Rice was ousted from the position and Disney did not provide further details regarding its decision.

The decision comes shortly after Disney faced backlash over its “woke” agenda after CEO Chapek in March declared his opposition to a Florida state bill that bans schools from teaching children in grades K-3 about gender identity and sexual orientation, a bill that has since come to be widely known as the “Don’t Say Gay” bill.

“Our goal as a company is for this law to be repealed by the legislature or struck down in the courts, and we remain committed to supporting the national and state organizations working to achieve that.”

The statement prompted protests outside the Walt Disney Company’s Burbank headquarters on April 6 and opposition from company employees and Florida politicians.

On Thursday, Disney board Chair Susan Arnold issued a statement of support for Chapek, stating that, “his leadership team have the support and confidence of the board.”