‘Disgrace’ If Djokovic Not Allowed to Enter US and Compete: Indian Wells Tournament Director 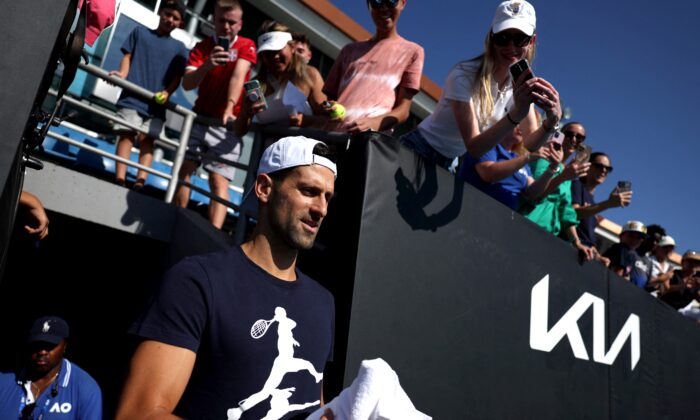 Serbia's Novak Djokovic arrives on court before practice at the Australian Open at Melbourne Park in Melbourne, Australia, on Jan. 23, 2023. (Loren Elliott/Reuters)
By Reuters

MELBOURNE—Novak Djokovic could end the year as the world’s top-ranked player but it would be a “disgrace” if his chances are affected by not being able to compete in the United States due to his unvaccinated status, Indian Wells tournament director Tommy Haas said.

Djokovic missed last year’s Australian Open and was deported from the country due to being unvaccinated against COVID-19. His three-year visa ban was overturned in November and he is back at the Grand Slam looking to win a 10th crown and 22nd major.

The Serbian was, however, not able to travel to New York for the 2022 U.S. Open without proof of vaccination, the same reason that forced him to skip ATP 1000 events at Indian Wells and Miami earlier in the year.

U.S. authorities said this month the requirement for foreign air travelers to be vaccinated against COVID-19 would be in place until at least April 10, meaning Djokovic will miss out on Indian Wells and Miami again.

Haas, also a former world number two player, said he hoped the rules would be relaxed sooner to allow Djokovic to compete.

“If Djokovic stays healthy, I don’t see how he’s not going to be number one,” Haas told reporters at Melbourne Park on Monday.

“Obviously the one problem being that he still cannot come to the United States, if he doesn’t play Indian Wells and Miami in March [it will be tough], they’re supposed to lift those mandates by mid-April.

“It would be nice to see if we could maybe lift those a little earlier and have him come to play Indian Wells and Miami. I think he wants to play, so we should give him the chance. Hopefully we can have him there.

“I mean, it would be a disgrace in my eyes if he wasn’t coming to these events, or not allowed to come.”

Haas added Indian Wells organizers would do “everything” to help Djokovic’s chances of playing there.

Indian Wells runs from March 8–19 and the Miami Open from March 22-April 2. The 35-year-old has previously stated he would miss Grand Slams rather than have a COVID-19 vaccine.