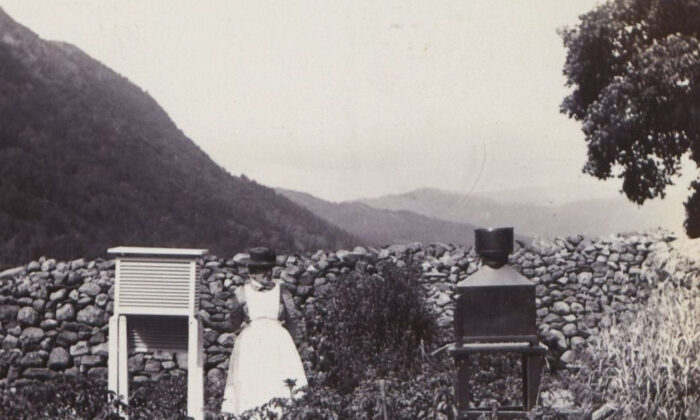 The Rainfall Rescue project was launched by the University of Reading in March 2020 which used the help of 16,000 volunteers to help digitally transcribe 130 years’ worth of handwritten rainfall observations from the Met Office archives. This increased the amount of pre-1960 observation data available for climate scientists and researchers by six-fold.

The detailed accounts of the amount of rain that fell go back to 1836, the same the year Charles Darwin returned to the UK on the Beagle with Vice-Admiral Robert Fitzroy, and a year before Queen Victoria took to the throne.

The results revealed the UK’s driest ever year on record is 1855, the third wettest month is December 1852 in Cumbria, and November of the same year the wettest month on record for many parts of southern England.

But after reading the Victorian data set, environmentalism skeptic Ben Pile, co-founder of the Climate Resistance blog, told The Epoch Times by email that the Met Office’s new extended dataset “shows us what many have been trying to tell the Met Office and its scientists for a long time: real-world data is far more important than computer simulation, and real data shows that we faced warmer, colder, wetter, drier and winder conditions in the past and that we grew better at coping with these challenges.”

“The hundreds of millions of pounds the Met Office have spent on supercomputers to try to detect humanity’s influence on the climate was a waste of money. We know that weather in the British Isles is extremely variable and even if they could detect trends, they would be of little value to planners. The historical record debunks climate alarmism, and shows us that we should rely on facts from reality, not on computer games,” he added.

In terms of linking climate linked to extreme weather, the Met Office noted that there is evidence of a human contribution to changes in temperature extremes, heavy rainfall events, and an increase in extreme high sea levels in a number of regions. It added that attribution science, the practice of linking weather events to human-influenced climate change, is adding to this evidence all the time.

Professor Ed Hawkins, Rainfall Rescue project lead and climate scientist at the University of Reading said that as “well as being a fascinating glimpse into the past, the new data allows a longer and more detailed picture of variations in monthly rainfall, which will aid new scientific research two centuries on.”

He added that it also “increases our understanding of weather extremes and flood risk across the UK and Ireland, and helps us better understand the long-term trends towards the dramatic changes we’re seeing today.”

However, Andrew Montford, deputy director of the Global Warming Policy Forum told The Epoch Times by email that he believed that “there is very little evidence that extreme weather events are becoming worse, and even less than any changes are outwith what would be expected from the large natural variability.”

The UK-based critical think tank on climate and energy policy was founded by former Conservative Chancellor Nigel Lawson. “I have no idea what Professor Hawkins is talking about when he mentions ‘dramatic changes.’ There is little in the UK weather data that merits such language,” added Montford.

Paper records studied by Rainfall Rescue volunteers contained observations between 1677 and 1960, based on rain gauges located in almost every town and village across England and Wales. One gauge included in the transcription was located next to Beatrix Potter’s Hill Top farm in the Lake District, where she wrote many of her most famous books.

Met Office spokesman Grahame Madge said that to try and use the unearthed Victorian data to state that “climate change isn’t happening or that we have seen more extremes in the past compared to what we are seeing now is not the case.” He added that the Met Office had indications of rainfall becoming considerably more “intense” on average.

“We’ve always had rainfall, we always will. But there is a broader alignment that a warmer atmosphere can hold more moisture, therefore we look for the trend to show increasing rainfall associated with climate change. We are beginning to see the fingerprint of climate change in the rainfall record, but given the natural variation of the UK rainfall record, it’s harder, more challenging to see that signal, but it’s still there,” said Madge.