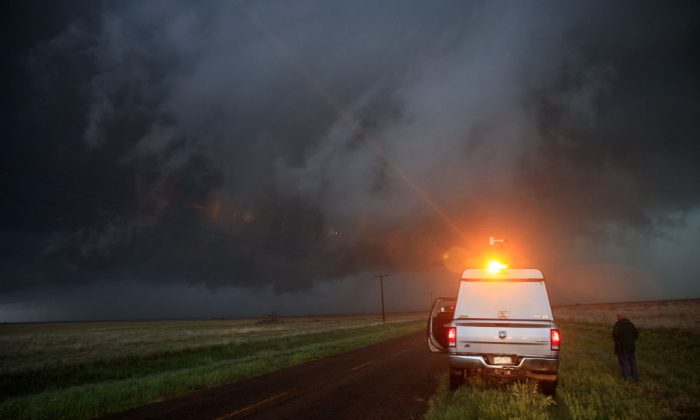 A supercell thunderstorm as it bears down on the area in Lamb County, Texas on May 9, 2017. (Drew Angerer/Getty Images)
US News

Update: Cause of death could be overdose, report says
By Bowen Xiao
Print

Update: TMZ reported that Taylor reported died of a suspected overdose. The official cause of death hasn’t been released. Law enforcement sources told the website: “It appears the death could be an overdose and Joel Taylor was consuming controlled substances.”

It reported: “A passenger who interacted with Joel tells TMZ, Joel had consumed enough GHB on the dance floor Tuesday that he was rendered unconscious and taken off the dance floor by 2 people and back to his room.”

Fans of the popular reality series “Storm Chasers” were left devastated after the death of Joel Taylor, one of the stars of the former Discovery Channel show.

Co-star Reed Timmer announced that Taylor’s death on Tuesday, Jan. 23. The cause of his death had not been released yet.

Taylor passed away at the age of 38.

“RIP my best friend and storm chasing partner, Joel Taylor. I am shocked and absolutely devastated by the loss of my incredible, caring friend,” Timmer wrote on Twitter. “We chased so many intense storms, and I wish we could have just one more storm chase. I’ll miss you forever, Joel. We lost a legend.”

RIP my best friend and storm chasing partner, Joel Taylor. I am shocked and absolutely devastated by the loss of my incredible, caring friend. We chased so many intense storms, and I wish we could have just one more storm chase. I'll miss you forever, Joel. We lost a legend pic.twitter.com/htN45t8wik

According to USA Today, Taylor grew up in Oklahoma, part of the iconic “tornado alley” area. He studied meteorology at a University of Oklahoma and later joined the Storm Chasers cast in 2008 before Discovery canceled the show in 2012.

Another friend of Taylor’s, Mike Olbinski, recalled how they met years ago adding that he “will be so missed.”

I was lucky enough to meet Joel a few years ago at Reed’s wedding. He was so kind to me and we got to hang out for a bit during those few days. I snapped this photo of him and that just seemed like who he was. A huge smile. RIP Joel Taylor…you will be so missed. pic.twitter.com/mZI5eHzhKG

The series “Storm Chasers” ran for five seasons on the Discovery Channel between 2007 and 2011, according to IMDB. It follows teams as they encounter severe weather across the central US region known.

A storm-chasing group Taylor was a part of called “Team Western OK Chaser” also mourned the loss with a tribute in a now-deleted Facebook post.

“Our community of Elk City and the Storm Chasing community lost a great guy today,” the post says, according to USA Today. “He was one of the most level headed chasers on the roads and truly a classy guy outside of chasing. He didn’t chase for the glory he chased because he had a true passion for storms.”

The group continued to say that the cause of Taylor’s death still remains unknown.