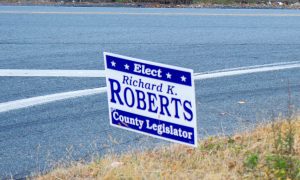 I Wish I Could Vote for Dick Roberts
0 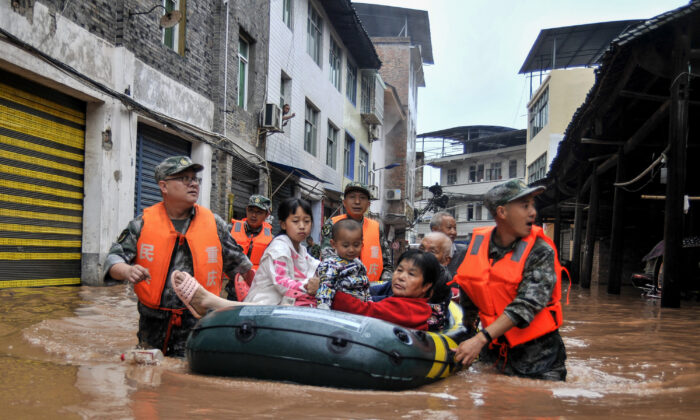 China, still grappling with the CCP virus pandemic, has been hit with wave after wave of natural disasters.

Weeks of torrential rainfall has sparked some of the worst flooding in decades, wreaking havoc in 26 provinces across central and southern China and disrupting the lives of more than 19 million people, according to authorities.

In recent weeks, hailstorms and earthquakes have also struck parts of the country, and swarming locusts and animal-borne diseases have only added to the country’s woes.

Close to 50 million Chinese have been affected by some form of natural catastrophe in the first half of the year, according to China’s emergency management authorities. Official tallies stated that the disasters have left 271 dead or missing, and displaced another 914,000 but the true numbers are likely far higher, given officials’ tendency to cover up information.

Almost daily rainfall across large swathes of China since June has caused around 300 rivers to exceed warning levels and prompted dozens of cities to send emergency alerts. Citizens have recounted houses and cars being washed away in the stormwater.

Hubei, the central Chinese province where the capital, Wuhan, was ground zero of the virus outbreak, was particularly hard-hit by the downpours. Unprecedented amounts of rainfall have paralyzed hundreds of roads, overwhelmed five major lakes in the region, and caused nearly 1,100 reservoirs to overflow, according to local authorities.

“Come see the ocean in Wuhan,” one local said, in a video showing knee-high water in the road.

In Shanghai, a trio of torrential rains, battering wind, and roaring thunder shook residents wide awake early on July 6. The accumulated rainwater on the rooftop of a shopping mall began to spill over, while water gushed from a manhole cover, according to accounts from locals and videos shared online. In the megacity of Chongqing in southwestern China, muddy water spilled from a third-floor window of a residential building, forming an artificial waterfall.

If the trend continues, locals and experts worry that the Three Gorges Dam, one of the world’s largest, may burst because of increasing water pressure, putting hundreds of millions who live along the Yangtze River at risk.

Severe flooding in a county in the eastern province of Anhui has caused the national college entrance exam—already postponed for a month due to the virus—to be further delayed, after only a quarter of the 2,000 registered students managed to show up, some of them by boat.

“Our home could be in danger any time,” said Ms. Deng, a resident from Huangshan city, a mountainous tourist attraction in Anhui. Afraid that floodwaters could pour into her house, she has been unable to sleep at night, she told The Epoch Times. Local floodwaters caused a road to the tourist site to collapse and crushed a tunnel underneath, creating a gaping hole of more than seven meters (23 feet).

She says she’s closely watching for any signs of water.

“The rain is too mighty. If you lose attention for even just 10 minutes, the house will be drowned,” she said, noting that more rain is forecast for the coming days.

Swarms of locusts have laid waste to crops in multiple agricultural provinces since June—some of which were already battered by flooding.

In Quanzhou, a southern agricultural county in flood-hit city of Guilin, 10 days of locust invasions have destroyed corn and grain fields, as well as orange and willow trees that were planted along river banks to prevent flooding, according to villagers.

“Even the leaves were not spared,” Mr. Zhao, a local farmer, told The Epoch Times. In early June, a locust invasion in Hunan Province caused residents to hide at home and tightly shut their windows, as the insects swarmed.

While critics and locals have raised concerns about the possibility of a food crisis due to the recent disasters, China’s top agricultural expert Yuan Longping rejects the assertion. Officials from Chengdu city in Sichuan have issued a notice encouraging villagers to convert fruit orchards into rice paddies, which suggests such a food shortage.

Meanwhile, the African swine fever, which first broke out among China’s hog population in August 2018, has again emerged in nine Chinese provinces, including Hubei, Yunnan, and Jiangsu. According to a June 29 study published in the U.S.-based “Proceedings of the National Academy of Sciences” journal, Chinese researchers also identified a swine flu virus named G4, which can be transmitted among humans.

The virus evolved from the H1N1 strain, which caused a global flu pandemic in 2009, and has been detected in over 30,000 hogs in 10 provinces in recent years.

Authorities in Inner Mongolia have issued a warning after a person was hospitalized, and suspected of contracting the bubonic plague, the cause for the Black Death pandemic more than 670 years ago.

A city in southwestern Guizhou Province, which also recorded heavy rainfall, experienced two small-scale earthquakes on July 2, while northern cities including Beijing and Baoding in neighboring Hebei Province saw hailstones carpeting the ground on July 1 and 5. And in late June, a hailstorm in Beijing continued for seven hours, sending down hail the size of eggs that resembled the shape of a virus.