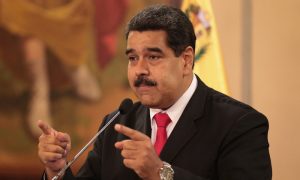 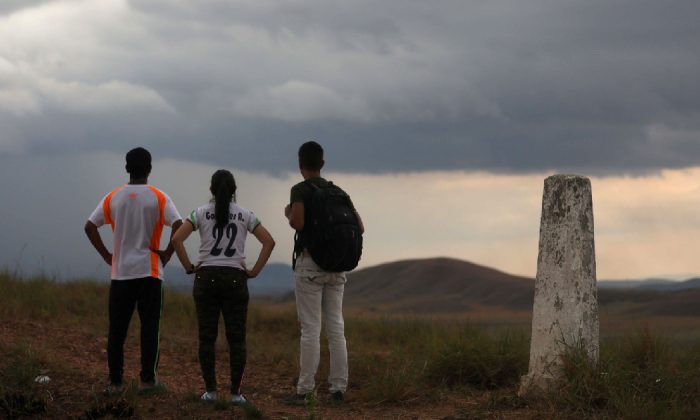 Venezuelan military deserters, of the National Guard, who don’t want to be identified, stand at the border point with Venezuela, in Pacaraima, Brazil April 11, 2019. (Pilar Olivares/Reuters)
Americas

Venezuelan military personnel are deserting to Colombia and Brazil in growing numbers, refusing to follow orders to repress protests against the government of President Nicolas Maduro, six of them told Reuters.

A lieutenant and five sergeants of the National Guard, the main force used by the Maduro government to suppress widespread demonstrations, said the bulk was going to Colombia, the most accessible border, but others like themselves had left for Brazil.

Colombian immigration authorities said some 1,400 Venezuelan military had deserted for Colombia this year, while the Brazilian Army said over 60 members of Venezuela’s armed forces had emigrated to Brazil since Maduro closed the border on Feb. 23 to block an opposition effort to get humanitarian aid into the country.

“Most military people that are leaving are from the National Guard. They will continue coming. More want to leave,” said a National Guard lieutenant, speaking earlier this month. She had just crossed into Brazil on foot, arriving in the frontier town of Pacaraima after walking hours along indigenous trails through savannah.

Officials in both countries said the pace of desertion has sped up in recent months as political and economic turmoil in Venezuela has worsened.

The deserters, who asked to withhold their names due to fear of reprisals against their families, complained that top commanders in Venezuela lived well on large salaries and commissions from smuggling and other black market schemes while the lower ranks confronted conflicts in Venezuela’s streets for little pay.

“They already have their families living abroad. They live well, eat well, have good salaries and profits from corruption,” said the lieutenant.

The Venezuelan government’s Information Ministry, which handles all media inquiries, did not reply to requests for comment for this story.

In February, Maduro’s ambassador to the United Nations, Samuel Moncada, claimed during a Security Council meeting the number of military desertions had been exaggerated. Foreign ministry spokesman William Castillo said at the time that just 109 of the 280,000-strong armed forces had deserted under Maduro.

A Venezuelan sergeant, who proudly donned his National Guard uniform for an interview in a hotel room in Pacaraima, said he could not provide for his two small sons on his $12-a-month salary.

“We risked our lives so much for the little we were paid,” he said. “I left because of this and the bad orders the commanding officers were giving us.”

Venezuelan freedom fighter @MariaCorinaYA joined me live from Caracas, where she says #NicolasMaduro no longer holds strong control of his military. #TrishRegan pic.twitter.com/9wcssrSrOI

The head of Venezuela’s opposition-led congress, Juan Guaido, backed by most Western nations, is trying to oust Maduro on the basis that the socialist president’s 2018 re-election was illegitimate.

But top armed forces commanders have remained loyal to Maduro because they earn well in dollars and have too much to lose by abandoning him, according to the National Guard deserters.

Maduro has placed military chiefs in high-level jobs running state companies so they do not turn against him, the sergeant said.

“Maduro knows that if he removes them from those posts, the military will turn their backs on him and could oust him in a coup,” he said.

Maduro has called Guaido a “U.S. puppet” trying to foment a “coup” and blames the country’s economic problems on U.S. sanctions.

Rebellion in the middle ranks of the National Guard has been contained by intimidation and threats of reprisals against officers’ families, the deserters told Reuters. They said phones of military personnel suspected of anti-Maduro sympathies were tapped to watch their behavior.

‘In Venezuela, gun ownership is not something that’s open to everybody. So if the military have the guns, they have the power’ https://t.co/pOdsekefc8

With desertions on the rise and dwindling support for Maduro, the government has used armed groups of civilians known as “colectivos” to terrorize Maduro opponents, the interviewees said. Rights groups in Venezuela have warned of rising violence meted out by the militant groups.

The government has also released jail inmates and put them in National Guard uniforms, to the disgust of soldiers with years of military career behind them, the six deserters said. It is unclear if the former inmates or militants are paid by the government.

A lack of food, water and medicines, along with extended blackouts, have added to a sense of anarchy, the deserters said.

The uniformed sergeant said he feared bloodshed at the hands of the “colectivos” trying to keep Maduro in power if the armed forces balked at government orders to repress protests.

“There won’t be enough soldiers left with hearts of stone to fire on the people,” he said. “We military know that among the crowds on the streets there are relatives of ours protesting for freedom and a better future for Venezuela.”