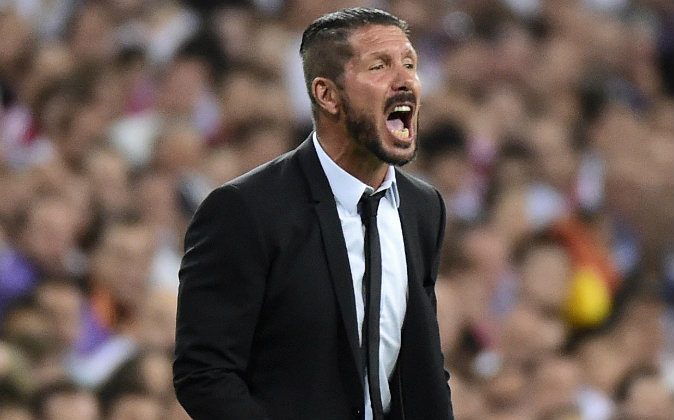 Simeone, coach of Atletico, was seen reacting agitatedly at the touch line in response to a couple of refereeing decisions against his team.

In the 27th minute, the 44-year-old Argentinian was seen patting an assistant referee at the back of his head by the referee, and was promptly sent off.

Here is an AP report of the first leg.

MADRID (AP) — James Rodriguez scored in his Spanish debut as Real Madrid earned a 1-1 draw against Atletico Madrid in the first leg of the Super Cup on Tuesday.

Rodriguez came on for Cristiano Ronaldo in the second half at the Santiago Bernabeu and found the back of the net in the 80th minute after he pounced on a loose ball in the penalty area following an attempt by Benzema.

Raul Garcia equalized for Atletico in the 87th from a corner.

Throughout the first half, Atletico held Madrid in check by dominating the midfield with disciplined tackling and ensuring at least two players shadowed forwards Gareth Bale and Ronaldo every time a pass was made to them.

Rodriguez joined Xabi Alonso, Toni Kroos and Angel Di Maria in Madrid’s midfield and was brought on by coach Carlo Ancelotti after Ronaldo had been seen holding and rubbing his left leg late in the first half. Di Maria had come on in the second half for Luka Modric.

“He did well,” Ancelotti said of James. “All the second half the team played with greater speed and intensity, looking for chances from the wings. He scored and that’ll give him more confidence.”

The match was preceded by a tribute to Madrid great Alfredo Di Stefano, who died in July. A string quartet played as the club displayed large photographs of the forward and the silverware he helped win to the crowd.

Tennis player Rafael Nadal, who this week said he will not be defending his US Open title, watched the match from the VIP stand.

“Kroos is an important player and a great signing for Real Madrid,” Nadal said at half time.

Madrid began with captain Iker Casillas in goal. He was tested twice in the first 15 minutes by shots from Saul Niguez and Mario Mandzukic.

Atletico played a physical game throughout and defender Guilhelmo Siqueira was the first to be shown a yellow card after fouling Bale on the right touchline in the 13th minute.

Alonso was booked in the 39th for a clumsy tackle from behind on Atletico’s left winger Jorge “Koke” Resurreccion.

The referee calmed tensions when he punished Sergio Ramos and Mandzukic with a yellow card each in 60th after the two players fell from an aerial challenge with flailing arms.

Rodriguez earned a free kick in the 67th which Bale took and Atletico goalkeeper Miguel Angel Moya punched out straight to Kroos, who miskicked and skied the ball.

Kroos then stabbed the ball weakly in the 75th minute, giving Moya an easy catch, and Benzema headed over the bar three minutes later.

Raul Jimenez substituted Mandzukic in the 78th for Atletico and Di Maria came on for Modric to reinforce Madrid’s midfield.

Two minutes after Rodriguez’s goal Casillas saved a shot by Koke and before Garcia equalized for Atletico.

The Bernabeu erupted with protests from its fans as Atletico midfielder Mario Suarez appeared to handle the ball in injury time, but the referee did not award the sought-after penalty.

The second leg is to be played Friday at Atletico’s Vicente Calderon Stadium.

Despite having scored an away goal, Atletico coach Diego Simeone said his team’s chances of winning the cup were still only 50 percent.

“We are going to find ourselves up against a team with many attacking options and very good players,” he said of the second leg.