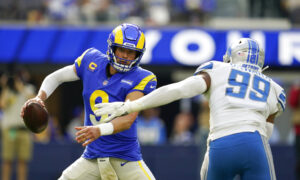 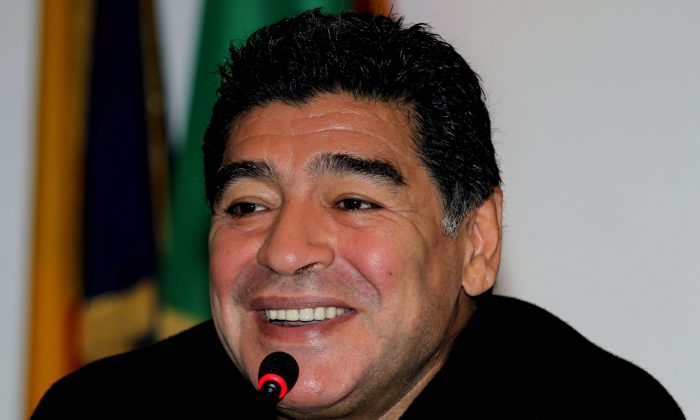 Diego Maradona Net Worth: How Much Does ‘Hand of God’ Legend Make?

He may have retired from football, but Argentina’s Diego Maradona is still making headlines in soccer today.

The 53-year-old is now a co-host of a daily World Cup 2014 show on Venezuela’s Telesur network, and he recently came out in defense of Luis Suarez.

FIFA slapped the Uruguayan with a 4-month football ban, and Maradona had came out in defense of his fellow headline-hogger.

“This is football, this is incidental contact,” Maradona said on Telesur.

“They have no common sense or a fan’s sensibility,” Maradona added, and pulled on a white T-shirt with the message, “Luisito, we are with you” towards the end of the broadcast.

Maradona is best known for his “Hand of God” goal over England in a 1986 World Cup semi final match. The forward left in the air and punched the ball into the back of the net, and the goal stood because the referee and his assistants thought that Maradona had used his head.

Today, the Argentine is worth $100 thousand, according to TheRichest.com.

RIO DE JANEIRO (AP) — Brazil’s World Cup has had great goals, great games and a great atmosphere. Yet it was missing the spice of scandal that made previous tournaments stick in the memory.

Luis Suarez’s apparent bite on Italian defender Giorgio Chiellini has left the Uruguayan striker’s future in the tournament at the mercy of a FIFA investigation.

Here are some other mad moments when players lost their heads and referees lost the plot.

Argentina’s Diego Maradona is considered the closest challenger to Pele for the world’s best-ever player. But perhaps his most memorable moment came at the 1986 World Cup quarterfinals in Mexico when he punched the ball into England’s net to give Argentina a 1-0 lead. To the fury of England’s players, Tunisian referee Ali Bin Nasser thought it was a header and awarded the goal.

The game was played amid simmering tension between the countries after the Falklands War a few years earlier. Maradona stoked the fires further after by saying the goal was righteous and scored “a little with the head of Maradona and a little with the hand of God” — giving it an iconic name and a place in World Cup folklore.

Typically for Maradona, who was as brilliant as he was belligerent, he scored one of the most amazing World Cup goals minutes later as he dribbled past half of England’s team to score the goal that secured a 2-1 win. Maradona and Argentina went on to lift the World Cup.

THE GOAL THAT WASN’T?

Long before the days of goal-line technology and high-definition replays, Geoff Hurst scored probably the most argued-over goal in World Cup history in England’s 4-2 win over West Germany in the 1966 final. With the scores locked at 2-2 in extra time, Hurst’s powerful shot ricocheted down off the crossbar and onto the ground, but had it crossed the line? England’s players said yes, West Germany’s players said no.

It was up to a linesman from the Soviet Union to decide. He gave the goal, and Germans still haven’t forgiven him. Modern studies suggest it wasn’t a goal.

THE GOALS THAT SHOULD HAVE BEEN

Individual bad calls by referees can be explained away, but a game full of them sparks conspiracy theories, and the performance of Ecuadorian referee Byron Moreno at the World Cup in 2002 still inflames Italians.

In the knockout game against co-host South Korea, Moreno made a litany of dubious calls, including giving the South Koreans a contentious early penalty, sending off Italy striker Francesco Totti for a supposed dive and wrongly disallowing an extra-time ‘golden goal’ winner by Damiano Tommasi. Italy lost 2-1, leaving fans speculating about a plot to keep the co-hosts in the tournament.

In 2011 Moreno was sentenced to 2 1/2 years in prison after being caught trying to smuggle heroin into the United States.

ZIDANE GOES OUT WITH A BANG!

In 2006, Zinedine Zidane’s masterful performances dragged an otherwise mediocre France team to the final against Italy. He gave his country the lead from the penalty spot. Italy’s Marco Materazzi equalized. Then without warning, ‘Zizou’ head-butted Materazzi in the chest in extra time and earned an instant red card. Zidane’s explosion was supposedly down to Materazzi insulting his sister.

Stunned fans watched Zidane walk off the pitch past the World Cup trophy, his shirt untucked and his career over in the most dramatic way. Without him, France lost a penalty shootout. It was Zidane’s last professional game.

Having served a ban for testing positive for cocaine while playing in Italy, Maradona was back at the World Cup in the United States in 1994 — but not for long. He failed a doping test for five different banned stimulants and was chucked out the tournament. Maradona reportedly told an Argentine television station: “They have retired me from soccer … my soul is broken.”

There have been plenty of crunching tackles at the World Cup, but few — probably none — with the ferocity of West German goalkeeper Toni Schumacher’s assault on France’s Patrick Battiston in the 1982 semifinal. Schumacher charged off his line and leapt into the onrushing Frenchman, knocking him unconscious.

Not only did Schumacher not get sent off or receive a yellow card, the referee didn’t even give a free kick. A measure of justice prevailed when Italy scored three times past Schumacher in the final.

There have always been rumors of teams coming to agreements before games to arrange a mutually-beneficial result, but none were as shamefacedly obvious as West Germany’s fix with neighbor Austria in 1982. It was the final group game and the equation was specific: If West Germany won by one or two goals, both teams were through. Any more, Austria was out while a draw or Austrian win would have sent the Germans home.

Knowing what they needed because Algeria had played Chile a day before, West Germany went 1-0 up after 10 minutes, then both teams pointlessly kicked the ball around, barely breaking a sweat and ensuring they both qualified at Algeria’s expense. The story goes that one television commentator refused to commentate on the farce and another suggested people switch over to something else.

Nowadays, the final group games at World Cups are played simultaneously to prevent such collusion.