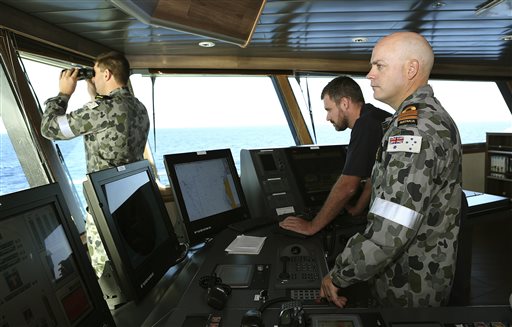 In this April 5, 2014, photo provided by the Australian Defense Force, Commander James Lybrand, right, watches from the bridge with Captain Nick Woods, Master of the ship, left, as they tow a pinger locator behind the Royal Australian Navy ship Ocean Shield in the southern Indian Ocean. Ocean Shield, which is carrying high-tech sound detectors from the U.S. Navy, is investigating a sound it picked up. (AP Photo/Australian Defense Force, Bradley Darvill)
Tech

Diego Garcia is one the sites believed by some to be a possible landing place for missing Malaysia Airlines Flight MH370.

That theory was bolstered when it was discovered that the flight simulator used by pilot Zaharie Shah included the island atoll.

The next thing to appear to boost the theory was a photo posted on 4Chan, allegedly by Philip Wood, an IBM engineer that was a passenger on MH370.

“I have been held hostage by unknown military personal after my flight was hijacked (blindfolded),” the poster said. “I work for IBM and I have managed to hide my cellphone in my [expletive] during the hijack. I have been separated from the rest of the passengers and I am in a cell. My name is Philip Wood. I think I have been drugged as well and cannot think clearly.”

The photo was reposted by blogger Jim Stone, who dabbles in conspiracy theories. He claimed that the EXIF GPS data attached to the photo shows a location on Diego Garcia, a British island that’s used as a United States army base.

However, posters on Metabunk.org say that EXIF data is easily replaced.

“It’s nonsense because it’s so easy to fake GPS EXIF data. Here’s the same ‘photo’ with the EXIF moved to the Flamingo hotel in Las Vegas,” said one poster.

“Since it’s such a trivial thing to fake, and combined with the ridiculous narrative of smugging an iPhone 5 up his rectum, and the image being black (iPhone 5 has a flash) the only sensible conclusion is that this is a hoax.

“The originally posted photo seems to have been clumsily faked using the free software “Picasa”, which left an indication in the EXIF data, adds extra “Photoshop” metadata, and stores the GPS data in a different format.

“This is so preposterous yet it’s gone viral as so many are willing to believe it. I’m particularly sad about such conspiracy theories because of the effects it has on the relatives.”

See an Associated Press update to the search for Flight MH370 below.

PERTH, Australia—Searchers looking for the missing Malaysia Airlines plane have discovered signals consistent with those emitted by black boxes in the Indian Ocean, but they may still be a long way from finding the first piece of wreckage. Here’s a look at what they’ve accomplished, and what remains to be done:

The Australian navy vessel Ocean Shield picked up the signals using a U.S. Navy device called a towed pinger locator. It’s essentially a long cable with a listening device, or hydrophone, attached to the end. It’s pulled behind the boat at a depth of 3 kilometers (1.9 miles).

The pinger locator is designed to detect signals at a range of 1.8 kilometers (1.2 miles), meaning it would need to be almost on top of the black boxes to detect them if they were on the ocean floor, which is 4,500 meters (14,800 feet).

The first signal was picked up Saturday evening and lasted two hours and 20 minutes before it was lost as the ship moved forward. The ship then turned around and a few hours later picked up a second signal that lasted for 13 minutes.

In an earlier development, the crew of a Chinese ship told Australian authorities they had picked up possible signals using a less sophisticated hydrophone dangled over the side of a small boat some 555 kilometers (345 miles) away from the Ocean Shield. Another ship is separately investigating further.

U.S. Navy Capt. Mark Matthews said on both occasions the Ocean Shield detected sounds, the pings were emitted about 1 second apart — consistent with those that could be sent from the black boxes: the flight data recorder and cockpit voice recorder.

The signals were broadcast at 33.3 kilohertz rather than the 37.5 kilohertz frequency at which black boxes are supposed to broadcast pings. Matthews said that according to the manufacturer, the frequency of the black boxes can drift near the end of the device’s shelf life, which is about six years.

Matthews said the signals are man-made. He said there’s always the possibility they’re getting a false reading, for instance from a device on their own ship, but they are careful to avoid that.

He said the two signal detections came from points estimated to be about 2 kilometers (1.2 miles) apart. Matthews said that water temperature and water layers can distort and refract signals, so they may in fact be from the same area.

On Monday, the Ocean Shield was trying to pick up the signal again, so far without success. Matthews said it would continue trying for at least another day. He said the boat tries to go over the area from different angles in an attempt to triangulate an exact position.

One way or another, the game will end soon. The black boxes are designed to emit pings for just 30 days, and 30 days have passed since the plane went missing March 8. Sometimes, the batteries last longer than required.

When crews determine the best possible location, the next step will be to send down the U.S. Navy’s autonomous underwater vessel Bluefin 21, a robot that can create a sonar map of the seafloor and any wreckage, as well as take photos.

Matthews said the Bluefin’s sonar can scan only about 100 meters (328 feet) and it can “see” with lights and cameras only a few meters. Since its range is limited, searchers are waiting to use it until they determine more precisely where the pings are coming from.

The Bluefin can explore the ocean floor for about 16 hours at a time. It takes another four hours for the return journey. It takes crews two to four hours to review the data it has gathered.

The Bluefin’s maximum depth is 4.5 kilometers, about the depth of the ocean floor. If any debris is lower than that, a different machine would need to be brought in, creating a delay.

If crews are able to locate the wreckage, Matthews said, they will prioritize what needs to be recovered first, which will likely include the black boxes.