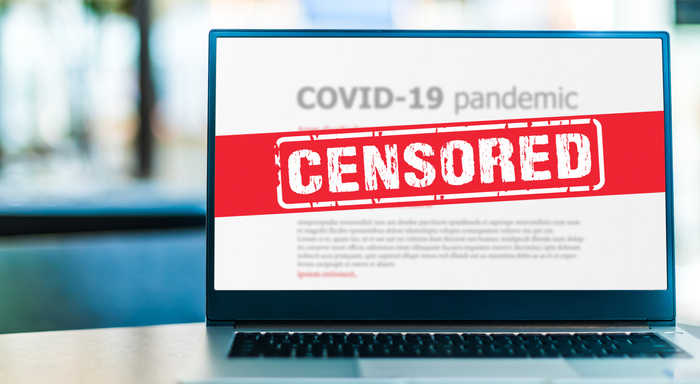 The COVID-19 pandemic is one of the most manipulated infectious disease events in history, characterized by official lies in an unending stream lead by government bureaucracies, medical associations, medical boards, the media, and international agencies. (Monticello/Shutterstock)
Viewpoints

Did the Censors Succeed?

These days, I rarely encounter people who disagree that the COVID-19 pandemic policy was a disaster.

You can usually get a laugh at a cocktail party when making fun of sanitizer madness, 15 days to flatten the curve, ubiquitous plexiglass, or six feet of distance. The school closures are in disrepute, as is the restriction on hospital visits or the banning of funerals and weddings. Even masking seems ridiculous in retrospect.

And remember when you couldn’t get a haircut for three months? How many lives did that save?

One even encounters widespread derision at the notion that the vaccines were effective at disease blocking. People whisper in private about vaccine injury, which seems incredibly common.

To be sure, there’s still a hard-core of true believers out there, easily recognizable by their beaks worn in public spaces and the funny two-step they do in stores to keep from getting near others. They wish we had stayed locked down longer or imposed even more violence against the unvaccinated.

Let’s say that group constitutes 10 percent but surely no more than 20 percent of the population. As for the rest, the days of delusion are long gone. The entire public health establishment faces tremendous public incredulity. Traditionally, medical science has been among the most trusted of all sectors of life. But the Pew Research Center documents that it has taken a huge hit this year. It’s not as bad as elected leaders in whom three-quarters of Americans say they have little or no trust, but it’s still bad.

And yet, however many people think these things in private, these opinions were nowhere in the mainstream media for the better part of two years. The near-universal opinion was that Dr. Anthony Fauci was a genius with the best interest of the country at heart. Dissidents were silenced and punished with throttles and bans. The government collaborated with Big Tech to mark all opposition to the extremist lockdowns and mandates as misinformation.

What effect does that have? It causes the opposition sectors to migrate into a Samizdat category, a banned point of view that’s nonetheless widely held. Think of opposition to Communist Party rule in the Soviet Union in the old days. Trust in the party was nearly zero, but that was hardly ever expressed in public culture. As a result, people felt a sense of shame for holding perfectly reasonable views.

In fact, most people who today disagree profoundly with regime priorities during the pandemic don’t know that some of the world’s leading experts on the topic shared their views completely. There were some who spoke out—not nearly enough—but there was a conspiracy from the top to crush and discredit them. We know this. We have the receipts.

The government worked closely with social media companies to shut down scientifically informed voices, which isn’t only an outrage against truth and justice; it’s also a flagrant violation of First Amendment rights.

Still, the censors succeeded in keeping these reasonable views out of the mainstream of the public mind, which is to say that their censorship worked. You and I might be pleased to have read the right Substack or encountered a contrarian book or paper. But remember that for every one piece of exposure of a dissenting perspective, tens of millions of others receive the mainstream line.

I was speaking to a group of highly informed finance professionals and making all of the above points. They seemed to be in full agreement. But then I became curious and asked how many in the audience had heard of the Great Barrington Declaration. Only six hands went up from the whole crowd.

Six people out of 600! This was a great reality check for me since this topic had reached more mainstream readers and listeners than any other during the pandemic. But in this crowd of highly educated professionals, only 1 percent had even heard of it.

This statement of public health principles has nearly 1 million signatures after a year of being online, but that’s a drop in the bucket compared with the daily reach of Fauci’s pronouncements. Even if people don’t really believe what they read and hear from the mainstream, a reputable alternative has never really had widespread reach.

The sad reality today is that people who have a seriously informed understanding of the issues underlying the great public health and economic calamity of our lifetimes—and perhaps in all of modern history—constitute a very tiny group. This is the triumph of the censors.

This leaves us today in a very strange position. An economic crisis is brewing, and inflation has already wrecked the value of wages and savings. This is a direct consequence of the pandemic lockdowns and wild congressional spending packages that were funded entirely by funny money created by the Fed. When Americans want to know why all of this is happening, they need only reflect on the policies over the past two years.

And yet, when you scour the mainstream media for this point of view, it’s extremely difficult to find. Even now, there has been no large effort to rethink what happened. Instead, we get the Orwellian memory hole. The entire lockdown experience is being dropped from memory simply because it was such an unworkable disaster but nonetheless one backed by the whole of the public and private establishment as if it were a normal and scientific application of public health mitigation strategy.

These days, the whole subject is treated like something weird that goes on in China and nothing more. The New York Times and CNN write about China’s continuing lockdowns as if nothing like that ever happened here, even though that did happen here. We just pretend otherwise.

Another strange effect of censorship is to train the public mind in a kind of protocol of compliance. We all know what we can and can’t say. We can believe what we want to believe of course, but constant compliance has spillover psychological effects. Force a person to behave as if he believes something long enough and it might eventually become an authentic belief. Even worse, a person comes to believe that authenticity and truth don’t really matter anymore.

I’m graced often these days with the opportunity to speak out about lockdowns and mandates and the remarkable disaster of the past 2 1/2 years. I often hear from listeners that it isn’t only educational; it’s also therapeutic. People truly need to talk, share, learn, decompress, and come to terms with the trauma that all of this has been for the world.

My message states to many people that they aren’t insane, evil, victims of misinformation, or dangerous non-compliers. Instead, they’re reasonable and responsible citizens who are looking at facts and reality for what they are. And the reality is that the ruling class that imposed this new order of things on the world is the real danger.

Aleksandr Solzhenitsyn served such a crucial role in the latter years of communism and after simply because he told the truth that everyone knew in their hearts but couldn’t formulate fully or state without penalty or personal trauma. He said openly and with moral passion what multitudes knew but couldn’t say.

There’s a crying need today for a coming together of reality and public culture instead of the preposterous game of pretend that Big Tech and Big Media play every day. They know they were and are wrong, but they have to keep up the masquerade as champions of science and slayers of misinformation. They wasted vast amounts of their own credibility in the effort and seem determined to keep it up until their reputations are in complete ruins.