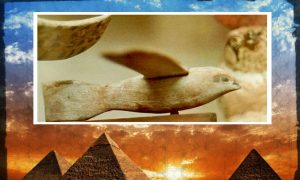 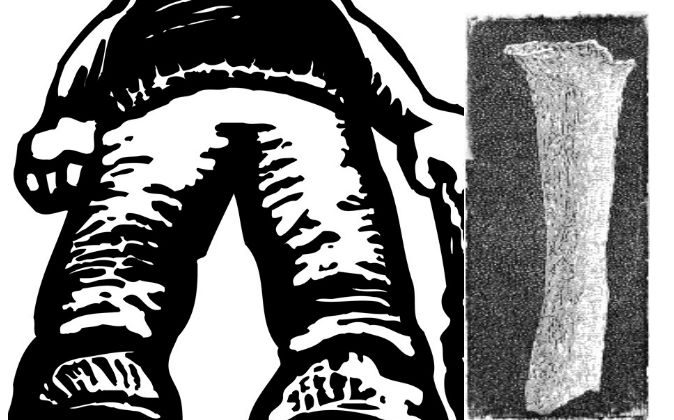 Left: An illustration of a giant. (Shutterstock*) Right: A humanoid humerus bone much larger than a normal humerus bone, discovered in France by Georges Vacher de Lapouge. (Wikimedia Commons)
Beyond Science

Many newspaper clippings can be found from the 19th century, and trickling on into the 20th century, reporting on the discovery of full skeletons or bones that indicate a race of giant humanoids.

For example, on Dec. 19, 1897, the New York Times reported from Maple Creek, Wis.: “One of the three recently discovered mounds in this town has been opened. In it was found the skeleton of a man of gigantic size. The bones measured from head to foot over 9 feet and were in a fair state of preservation. The skull was as large as a half bushel measure. Some finely tempered rods of copper and other relics were lying near the bones.”

On May 3, 1912, the New York Times reported from Madison, Wis.: “Upon opening one large mound at Lake Lawn farm, 18 skeletons were discovered by the Phillips Brothers. The heads, presumably those of men, are much larger than the heads of any race which inhabit America today.”

It isn’t only Wisconsin that seemed a hotbed of giant-bone discovery. Ohio had many such reports from this time period, and large bones attributed to giants have been found up into Eastern Canada. Giant bones have allegedly been found all over the world.

In August 1890, The Popular Science News and Boston Journal of Chemistry reported a finding by anthropologist Georges Vacher de Lapouge at the Bronze Age cemetery of Castelnau-le-Lez, France. Lapouge had found unusually large human humerus bones. The journal wrote: “If we judge of the height of this neolithic giant by the usual proportion of the parts of the skeleton to each other, he must have been between 10 and 11 feet high. The question remains whether this excessive growth was a normal one, or due to a diseased condition … On this point the authorities differ, one professor of the University of Montpellier holding that the bones are normal in every respect, while another finds evidence of a diseased condition.”

It also reported that there was a tradition among the local peasants that a giant once lived in a nearby cave. At least in this case, the giant myth may have some truth to it.

These are just a few cases representative of many others. So if all these bones were found, why aren’t they being studied by modern scientists and definitively proven to be giant bones or something else?

Author of the book “A Tradition of Giants,” Douglas Ross Hamilton suggests the following among the reasons these bones are not being studied today.

When the bones made contact with oxygen, some quickly turned to dust. Some were already almost disintegrated by the time they were discovered. Hamilton wrote: “Many skeletal remnants uncovered by early settlers, antiquarians, collectors, and museum officials were already of such apparent antiquity that they had already returned to the consistency of the earth, leaving but an outline or less.”

The Native American Graves Protection and Repatriation Act (NAGPRA) resulted in the reburial of some bones that had been unearthed and prevented the unearthing of others. NAGPRA was intended to preserve the sacred nature of Native American burial rights and to respect the belief that the remains of ancestors should not be disturbed.

Hamilton wrote: “The museums that once claimed the larger bones in their itinerary no longer respond to requests for such unusual remains except in a fashion of denial. … it is as though they never existed.”

He looked at the history of the Smithsonian, noting in particular the control anthropologist Ales Hrdlicka demanded in shaping the view of Native American history when he became curator of the Division of Physical Anthropology in 1910.

For example, Hrdlicka was adamantly opposed to any view that humans arrived in North America more than a few thousand years ago. Hamilton explained: “The Harvard faculty geologist Kirk Bryan (1888-1950) once advised his students that during the ‘reign’ of Hrdlicka, ‘if you ever find evidence of human life in a context which is ancient, bury it carefully, but do not forget about it.'”

In 2009, an Associated Press article reviewed some of Hrdlicka’s strange behavior. The article was about the reburial of Northern Mexico’s Yaqui Indians, who were killed in a 1902 massacre by Mexican federal troops. The article stated: “As if the horror of the massacre weren’t enough, U.S. anthropologist Ales Hrdlicka came upon some of the bodies while they were still decaying, hacked off the heads with a machete and boiled them to remove the flesh for his study of Mexico’s ‘races.'”
Hrdlicka had also dumped an infant’s corpse, taking the baby carrying-board underneath it and the blood-spattered blankets to the museum. The museum told AP that “cultural sensitivities and values within the museum community have changed” since Hrdlicka’s era. Hrdlicka also made significant contributions, including developing the theory that native Americans came from Asia across the Bering Strait.
MORE:
Archaeologist Dr. Warren King Moorehead, a contemporary of Hrdlicka’s, had taken an interest in giants. Dr. Moorehead was a respected scholar of the time, he was even offered a political appointment in Indian relations by Teddy Roosevelt. The Smithsonian purchased purported giant bones Moorehead was studying. But, Hamilton wrote: “The Smithsonian today is unable to account for these and many other remains and artifacts.”

He wrote: “Instead of diffusing knowledge, it [the Smithsonian] has steadfastly refused to allow its vaults to be opened to scholars from other museums, state and local institutions, and any independent research—especially if the intent is to search out anomalies.”

As settlers developed America, mounds were flattened and careful archaeological excavation was not common. Some of the bones were likely displayed as curiosities, then disposed of.

Hamilton quoted the Proceedings of the New York Historical Society (1843): “…A vast deal is yet to be accomplished in this field, and it is to be hoped that an effort will be made to rescue from oblivion the monuments that yet remain in various parts of our country, of the existence of a great race of people, who are fast perishing. Ever[y] year these relics become less; the mounds and earth works of the west are leveled as the settlements are extended, and a few years will suffice to destroy those interesting memorials of a great and powerful nation.”

It is unclear whether “a great race” referred specifically to giants or to Native Americans, but the statement could nonetheless apply to giants if such a race existed.

*Illustration of a giant via Shutterstock