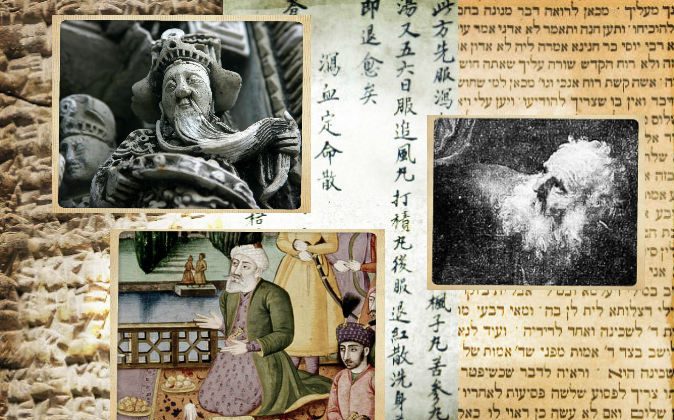 Top left: A carving on a Taoist temple; Taoist masters throughout history are said to have lived hundreds of years. (Shutterstock*) Bottom left: An illustration from “Shahnama,” a 10th century Persian poem listing lifespans for kings of hundreds of years and even over 1,000. (Wikimedia Commons) Right: A painting of the biblical figure, Abraham, by Rembrandt; Abraham is said to have far outlived the lifespan expected in modern humans. (Wikimedia Commons) Background: (L-R) An ancient Sumerian tablet (Wikimedia Commons), an ancient Chinese medical text (Defun/iStock/Thinkstock), and Hebrew writing (Shutterstock*)
Beyond Science

It isn’t only biblical figures who lived to well-seasoned ages of 900 years or more. Ancient texts from many cultures have listed life spans most modern people find simply and literally unbelievable. Some say it’s due to misunderstandings in the translation process, or that the numbers have symbolic meaning—but against the many explanations are also counterarguments that leave the historian wondering whether the human lifespan has actually decreased so significantly over thousands of years.

For example, one explanation is that the ancient Near East understanding of a year could be different than our concept of a year today. Perhaps a year meant an orbit of the moon (a month) instead of an orbit of the sun (12 months).

But if we make the changes accordingly, while it brings the age of the biblical figure Adam down from 930 to a more reasonable 77 at the time of his death, it also means he would have fathered his son, Seth, at the age of 11. And Enoch, another biblical figure, would have only been 5 years old when he fathered Methuselah.

Similar inconsistencies arise when we adjust the year figures to represent seasons instead of solar orbits, noted Carol A. Hill in her article “Making Sense of the Numbers of Genesis,” published in the journal “Perspectives on Science and Christian Faith” in December 2003.

Similar problems have arisen when adjusting ages in ancient texts with the assumption that authors used a certain pattern for skewing the actual ages (such as multiplying them by a given number).

“Numbers [in Genesis] could have both real (numerical) and sacred (numerological or symbolic) meaning,” Hill wrote.

In both Genesis and in the 4,000-year-old Sumerian King List—which lists the reigns of single kings in Sumer (ancient southern Iraq) as exceeding 30,000 years in some cases—analysts have noted the use of square numbers.

Much like the Bible, the King List shows a steady decline in lifespans. The list differentiates between pre-flood and post-flood reigns. The pre-flood reigns are significantly longer than the post-flood, though even post-flood lifespans are shown to be several hundred years or more than 1,000 years. In the Bible, we see a progressive decline over the generations from Adam’s 930-year life, to Noah’s 500 years, to Abraham’s 175.

Dwight Young of Brandeis University wrote of the post-flood lifespans in the Sumerian King List: “It is not merely because of their largeness that some of these numbers appear artificial. Etana’s 1560 years, to cite the longest, is but the sum of the two preceding reigns. … Certain spans seem simply to have arisen as multiples of 60. Other large numbers may be recognized as squares: 900, the square of 30; 625, the square of 25; 400, the square of 20 … even among smaller figures, the square of six appears more frequently than one might expect.” Young’s article, titled “A Mathematical Approach to Certain Dynastic Spans in the Sumerian King List,” was published in the Journal of Near Eastern Studies in 1988. Paul Y. Hoskisson, director of the Laura F. Willes Center for Book of Mormon Studies wrote along a similar vein of the patriarch ages in the Bible in a short article for the Neal A. Maxwell Institute for Religious Scholarship.

On the other hand, looking at patterns, co-founder of the Church of God in South Texas Arthur Mendez thinks the rate of decline in longevity from pre-flood times as recorded in ancient texts to today matches the rate of decay observed in organisms when they are exposed to radiation or toxins.

Accounts in Many Cultures, Including Chinese and Persian

Dr. Hou said the Eastern key to longevity is “nourishing life,” including not only physical nourishment, but also mental and spiritual nourishment.

The Shahnameh or Shahnama (“The Book of Kings”) is a Persian epic poem written by Ferdowsi around the end of the 10th century A.D. It tells of kings reigning 1,000 years, several hundred years, down to 150 years, and so on.

Even today, people report lifespans of some 150 or more years. These reports often come from rural areas, however, where documentation is scant. Documentation was probably even less valued in rural communities more than a century ago, making it harder to prove such claims.

One example is that of Bir Narayan Chaudhary in Nepal.

In 1996, Vijay Jung Thapa visited Chaudhary in Tharu village of Aamjhoki in the Tarai region. Chaudhary told him he was 141 years old,  Thapa wrote in an article for India Today. If this claim was true, Chaudhary trumped the Guinness World Record holder for the longest life ever recorded by almost 20 years.

But Chaudhary didn’t have the papers to prove it. He did, however, have collective village memory.

“Almost all the elders around remember their youth when Chaudhary (already an elder) would talk about working in the first Nepal survey of 1888,” Thapa wrote. “Village logic goes that he must have been more than 21 then, since the survey was a responsible job. Chaudhary claims to have been 33 and still a stubborn bachelor.”

Many people in the Caucasus region of Russia similarly claim ages reaching even over 170 years without the documentation to back their claims.

Dr. Hou wrote: “These exceptionally long-lived people have invariably lived humble lives, doing hard physical work or exercise, often outdoors, from youth well into old age. Their diet is simple, as is their social life involving families. One example is Shisali Mislinlow who lived to be 170 years old and gardened in the Azerbaijan region in Russia. Mislinlow’s life was never hurried. He said, ‘I am never in a hurry, so don’t be in a hurry to live, this is the main idea. I have been doing physical labor for 150 years.'”

A Matter of Faith?

The issue of longevity in ancient times has long been connected to Taoist practices of internal alchemy, or mind-body cultivation, in China. Here, longevity was connected with virtue. Likewise it is intertwined with Western spiritual beliefs as part of the Bible.

Mendez quoted first century Roman-Jewish historian Titus Flavius Josephus: “Now when Noah had lived three hundred and fifty years after the Flood … But let no one, upon comparing the lives of the ancients with our lives, and with the few years which we now live, think that what we have said of them is false; or make the shortness of our lives at present an argument, that neither did they attain to so long a duration of life, for those ancients were beloved of God, and [lately] made by God himself; and because their food was then fitter for the prolongation of life, might well live so great a number of years: and besides, God afforded them a longer time of life on account of their virtue, and the good use they made of it.”

For now, modern scientists are left either to believe what ancient records and village memory have to say about seemingly unbelievable lifespans, or to consider the accounts exaggerations, symbolism, or misunderstandings. For many, it’s simply a matter of faith.

An earlier version of this article had the name Enoch where the name Seth should have been. Epoch Times regrets the error.