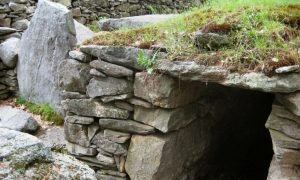 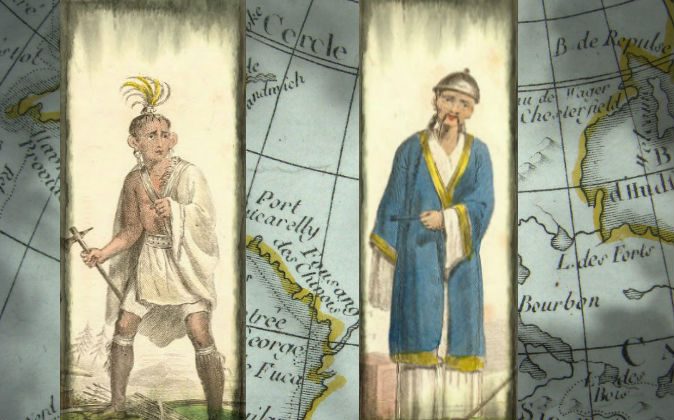 Illustrations of a Chinese man and a Native American from the 18th or 19th century, artist unknown. Background: Mention of Fusang ("Fousang des Chinois") on a 1792 French world map, in the area of modern British Columbia. (Wikimedia Commons; edited by Epoch Times)
Beyond Science

It is commonly held that Native Americans are descended from people who traveled across the what is known today as the Bering Strait, between Siberia and Alaska, some 10,000 years ago. At the time, water levels were low and a land bridge emerged, connecting the continents. It is also commonly held that from the time of this crossing until about 1000 A.D. when the Vikings arrived, no expeditions brought explorers or colonists from the Old World to the New.

Yet some say that puzzling artifacts, as well as the results of recent DNA studies performed on Native Americans, may suggest contact between ancient China and North America.

John A. Ruskamp Jr. is a research analyst who has compared ancient Native American glyphs with ancient Chinese pictograms, finding what he says is a sure match between the two. The glyphs and pictograms date to a period long after the Bering Land Bridge crossing and long before modern contact between Chinese and Native American cultures. Geneticist Dr. Donald Yates has studied Native American DNA, finding what he believes may be genetic links to colonists from China’s ancient or medieval periods of history.

Yates hypothesizes that Native American genealogy is not as simple as commonly held. He says the ancestors of today’s Native Americans may not have come in a single migration. He thinks other boats may have landed on the shores of the New World, carrying explorers unknown to historians today.

We will briefly look at some of Ruskamp’s and Yates’s findings here.

Ruskamp has used the Jaccard Index of Similarity to compare Native American glyphs to Chinese pictograms. This index was developed by 19th century botanist Paul Jaccard and it is used to statistically compare similarity and diversity in sample sets. On his website, Ruskamp shows a list of 53 ancient Chinese pictogram-glyph pairings. Using the Jaccard Index, he calculated that in all 53 pairings, it is more than 95 percent likely that the glyphs match the pictograms. In other words, the chances that the glyphs formed independently—and that it’s just a coincidence they look like the pictograms—is less than 5 percent, according to Ruskamp. In most cases, it’s less than one percent.

A glyph found in New Mexico, for example, forms a traditional Chinese oracle-bone prognostication, wrote Ruskamp in an article on his website. The New Mexico glyph, if interpreted using the ancient Chinese pictograms, reads: “The next 10-day period will be auspicious.” Ruskamp has studied many more glyph-pictogram pairs than those in the list of 53 discussed here, and he continues his research.

“This is a classic example of a Chinese oracle-bone era divination. The presence of such a message in North American rock writing indicates that ancient Asiatic people were present in the Americas about 1000 B.C., for oracle-bone writing fell into disuse around this time and it was not until 1899 A.D. that it was rediscovered and subsequently deciphered in China,” Ruskamp wrote. “Hence, these old and repatinated glyphs (age confirmed by senior NPS [National Park Service] staff) could only have been made by ancient Chinese explorers shortly after the end of the Shang Dynasty, when the script became lost to human memory for the next 2,900 years.”

Ruskamp continued: “Noteworthy is the fact that both Native Americans and Asiatic people followed 10-day sacred calendars. This most curious fact was noted by Michael Zeilik in his 1986 treatise titled, ‘The Ethnoastronomy of Historic Pueblos, II Moon Watching.’ Here he wrote that the Native American 10-day calendar is ‘a tradition also found among arctic and subarctic peoples in Asia.'”

At the request of Yates’s organization, DNA Consultants, Ruskamp analyzed the markings on an intriguing artifact known as the Thruston Tablet. The tablet was exhumed in a Mississippian period (800–1600 A.D.) mound near Castalian Springs in Sumner County, Tenn., by archaeologist Gates P. Thruston in 1870. Interpretations of the scenes it depicts are varied, ranging from warfare between Native American bands, to Native American myths, to a meeting between the Old World and the New.

Ruskamp identified what could be Chinese pictograms on the Thruston Tablet. He noted that one of the purported pictograms could, however, be a sort of stick man, and it’s hard to tell with an artistic depiction of an ancient scene.