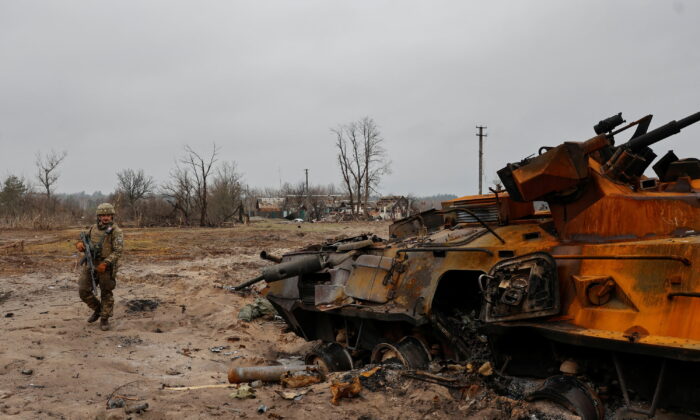 A Ukrainian service member inspects a destroyed Russian BTR-82 armored personal carrier (APC) in a village near a frontline as Russia's attack on Ukraine continues, in the Kyiv region, Ukraine, on March 31, 2022. (Serhii Nuzhnenko/Reuters)
Thinking About China

Dictatorships Are Bad at Fighting Wars

Reports suggest that Russian generals are afraid to tell the truth, which proves the weakness of dictatorships in fighting wars.

Recent news from the Ukrainian war indicates that Russian forces have accidentally shot down their own plane and that many military commanders are afraid to tell Vladimir Putin the truth.

To understand why, we can simply examine a previous Russian dictatorship. Joseph Stalin’s actions in the late 1930s crippled the Russian army. Most of the senior officers were purged, and those that remained were convinced that their lives depended upon rigid and timid applications of Stalin’s orders regardless of battlefield conditions.

Stalin was desperate to maintain peace with Germany, so he forbade units on the front lines from taking basic and proper defensive preparations. Cowed generals refused to offer alternate suggestions.

In the early days of World War II, the complete strategic surprise and decisive penetration by German units quickly turned the Russian army into little more than a mob. On the second day of the invasion, Russian troops tried to counterattack according to plan. Still, the shattered telephone lines, jammed radios, overwhelming airpower, and an enemy that seemed everywhere at once quickly turned that unit into a handful of desperate fugitives seeking to escape encirclement.

The reality on the front was so bad and leaders like Stalin so out of touch that many Russian units that no longer existed received orders to counterattack from locations they had fled days before. Officers who knew the actual situation were too afraid of being purged to contradict Stalin and simply passed on the ridiculous orders.

In short, the power a dictator had to ruin lives based on his whims meant that the dictator wasn’t receiving the necessary criticism of his policies or the basic honesty needed to make correct decisions. And the most recent news about Putin’s army in Russia confirms this trend.

But the Chinese regime doesn’t have to wait for war to see the adverse effects of top-down dictatorial policies. During the early days of COVID-19, brave whistleblowers were suppressed for telling uncomfortable truths about the coronavirus. And this caused the situation to become much worse than it could have been. It also meant that Beijing’s handling of the pandemic sent a message to junior officers and noncommissioned officers (NCOs) that honest opinions are not welcome if opinions could damage the Chinese Communist Party (CCP). Even in peacetime, the Chinese people have died because of it.

Chinese authorities were good at top-down central planning during the early days of COVID. For example, they quarantined the entire city of Wuhan, Hubei Province, and built several new hospitals in about six days each. But that reveals an authoritarian use of slave labor and not efficiency or honest communication up the chain of command. Moreover, the regime owns hospital ships and trained units to help in humanitarian efforts, but they have been absent from the effort.

Shutdowns became fashionable around the world, but in mainland China, without pushback from the people, the lockdowns were longer and more damaging. Two years later, while most of the world is opening up, China is going the other way and shutting down due to a recent surge in COVID infections.

The inability to listen to front-line individuals with direct knowledge of problems and the fondness for top-down, centralized planning that ignores criticism could hurt China in a potential conflict.

Warfare is incredibly chaotic, and intelligence from the front lines is paramount. Soldiers from dictatorships are often more scared of making mistakes and getting punished than telling the truth to leaders. Additionally, a dictatorship might buy the fanciest weapon systems, but the soldier afraid of making mistakes in a chaotic environment will be unable to fight a war.

For example, the Iranians imported sophisticated Russian anti-missile technology. But during the war scare in early 2020, they had trouble tracking and identifying a civilian airliner, so they panicked and shot it down. The Russian military accidentally shot down one of their fighter planes using their equipment, the United Kingdom’s spy chief said on March 31.

The lessons of Russian history and the CCP’s “zero-tolerance” COVID policy suggest that even with advanced military equipment, the Chinese military is full of officers who fear telling the truth. Thus, leaders like Xi Jinping will make bad decisions. And the soldiers in that military are too afraid of making mistakes to fight effectively. They instead have a culture based on fear and loyalty to the CCP.

Punishing whistleblowers or those who tell the truth would have devastating consequences in battle, as shown by the Soviets in World War II, the Russians in Ukraine, and China in the next war.