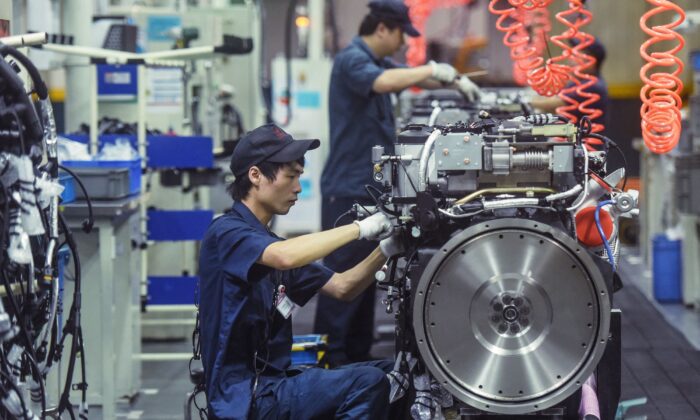 A worker produces heavy truck engines at a factory in Hangzhou, in China's eastern Zhejiang Province on Oct. 18, 2021. (STR/AFP via Getty Images)
Thinking About China

Factories in China are contracting, which reveal long-term economic trends. Not many people realize that this is the result of faulty dictatorial polices of the Chinese Communist Party (CCP) and will lead to greater losses for the regime.

Recent data from the Purchasing Managers’ Index (PMI) shows that more factories in mainland China are unexpectedly shutting down. The number was 49.6, and anything below 50 constitutes a contraction. China has seen factories outsource elsewhere, but a confluence of factors have made it more sharply felt and indicates larger trends that suggest the regime’s style of governance is the root cause.

When the CCP opened up China’s economy in the late 1970s, it had a younger population that commanded smaller pay. China’s proximity to nearby markets quickly made it a business hub for the world. By 2011, it had become the world’s largest manufacturer.

As Forbes reported, communist China’s dominance attracted attention and competitors. However, the damage to the environment, coal use in industrialization, and increasingly sophisticated manufacturing that required an educated workforce began to erode China’s dominance. The average age of their population increased, which is a result of the CCP’s one-child policy. And their workers demanded more wages.

COVID-19 brought more changes that accelerated these trends. As the epicenter of the virus, the regime shut down large swaths of the country, including the manufacturing hub of Wuhan. This received a great deal of praise from control-loving elites in the United States, but it had damaging effects. With the supply chain disrupted, many companies vowed to move away from dependence on Chinese manufacturing, including Hasbro, Nike, Nintendo, Apple, and Go Pro.

These trends all seem indicative of market forces, but few have considered how this trend reflects the rot at the core of the communist dictatorship. Shutdowns became fashionable around the world, but in mainland China, without pushback from the people, the shutdowns were longer and more damaging. Entrepreneurs were silenced and the workforce of a command-driven economy were forced to stay home. It is true that a centrally commanded economy can maintain a long vision and invest in sectors deemed important, but without the input of the people, it can double down on bad policies like lockdowns that drove companies to form new supply chains.

For example, China’s command driven economy created a real estate bubble that will create a bigger crash than the 2008-2009 financial crisis in America. Focused on manufacturing, the regime showed the advantages of top-down central planning during the initial panic over COVID-19. Authorities quarantined the entire city of Wuhan, Hubei Province, and built several new hospitals in just a few days. But that reveals an authoritarian use of slave labor, and not efficiency. Moreover, the military actually has hospital ships and trained units that are supposed to help in humanitarian efforts, but they were noticeably absent from the effort. The people weren’t enthusiastic behind these measures, but they were forced to accept them by the naked use of power. And while official numbers are hard to gauge, the loss of Chinese manufacturing suggests an economic punishment of the regime’s authoritarian policy.

Finally, this power the communists wield not only undermines their manufacturing, but can cause the rebellion they so fear. The power of a legalist state, like the modern regime, could command large amounts of labor, but ancient or modern dictatorships contained the seeds of their own destruction. The CCP decimated democracy activists in Hong Kong and have built what are effectively concentration camps for their Uyghur minorities. There is an inherent flaw in harsh government control that both Confucians and Daoists exposed.

Very simply, an authoritarian government can command bodies, but never win the commitment of its population. In the tumultuous Warring States period, rulers needed more than force, but a powerful and ruling ideology that gained the enthusiastic love and acceptance from the people to succeed. Different schools of thought came to similar conclusions. The prominent Confucian writer Mencius was rather brief, but summarized the principle very well when he said that “when force is used to make men submit, they do not submit in their hearts.” The Daoist writing, “The Pheasant Cap Master,” said the people of a harsh legalist state seethe with anger in their hearts. And writings like the Han Dynasty era “Huainanzi” said that eventually those grievances accumulate until peasants with improvised weapons can overthrow a dynasty with power that stretched to every horizon.

It is important to consider why manufacturing is leaving mainland China. The contraction indicated in the most recent economic report should caution us against straight line projections of communist dominance. It reveals the effects of COVID-19, and an aging and more educated population. But it also suggests the severe limitations of a dictatorship. The CCP could swiftly build a field hospital for COVID-19 patients, but didn’t have the wisdom, transparency, and respect for citizens to listen to the early whistleblowers when the outbreak first emerged in China. And it ignores fundamental ancient wisdom from classic texts at its own peril.