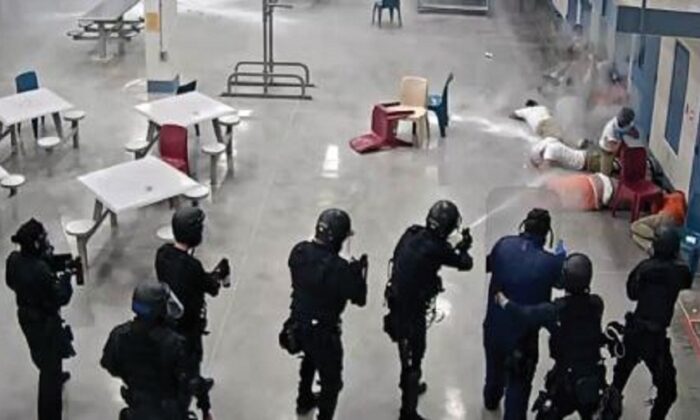 LPCC staff fire chemical agents at detainees who were protesting in a housing area, in Eloy, Arizona, on April 13, 2020. (LPCC via DHS OIG)
US News

An unannounced remote inspection of the Immigration and Customs Enforcement’s (ICE) La Palma Correctional Center in Eloy, Arizona, last year uncovered the violations, which were made public in a report published last week by the DHS Office of Inspector General. ICE is a federal law enforcement agency that’s a component of DHS.

The inspection, which ran from August to November 2020, “identified violations of ICE detention standards that threatened the health, safety, and rights of detainees,” the watchdog report stated, adding that “detainee reports and grievances allege an environment of mistreatment and verbal abuse, including in response to peaceful detainee protests of the facility’s handling of the pandemic.”

The correctional facility didn’t enforce ICE precautions such as the recommended use of face coverings and didn’t meet standards for medical care, segregation, and communication of detainee grievances.

That lack of enforcement may have contributed to a COVID-19 outbreak that saw some 17 percent of the 1,223 detainees test positive for the disease on Aug. 19, 2020.

The medical unit, which was critically understaffed, took an average of 3.35 days to respond to detainee sick call requests and neglected to fill some prescriptions. The facility didn’t consistently provide required care for illegal immigrants in segregation, and didn’t consistently record when medicine was given or when medical visits were conducted.

Additionally, the facility “did not give timely responses to most detainee grievances and, in some cases, did not respond at all.”

Detainees complained to watchdog officials about alleged excessive use of force, including the use of pepper spray, pepper balls, and chemical agents. Officials confirmed that such substances have been used to end protests, such as one on April 13, 2020.

An image from surveillance video showed facility staff deploying the agents to bring an end to the protest.

“Some of the things that were listed in the report are not new and unfortunately people that are in detention have to deal with that,” the attorney added.

ICE said in a statement that it is “committed to ensuring that all those in our custody reside in safe, secure, and humane environments and under appropriate conditions of confinement.”

“Many practices initiated at La Palma, such as the 14-day quarantine period, resulted in reduced detainee-to-detainee exposure among the general population, and this aspect was acknowledged in the OIG draft report,” the agency stated. “ICE takes issue with the accuracy of other findings in the draft report which relied on uncorroborated allegations and lack of appropriate context regarding medical staffing.”

CoreCivic, a company that helps manage the facility, said the report included numerous falsehoods about the facility.

“We operate every day in a challenging environment that was made all the more difficult by a pandemic with which the entire world has and continues to struggle with,” a spokesperson told news outlets. “We always appreciate the feedback and accountability that our partners provide, and we strive every day to do better in our service to them and the people in our care.”