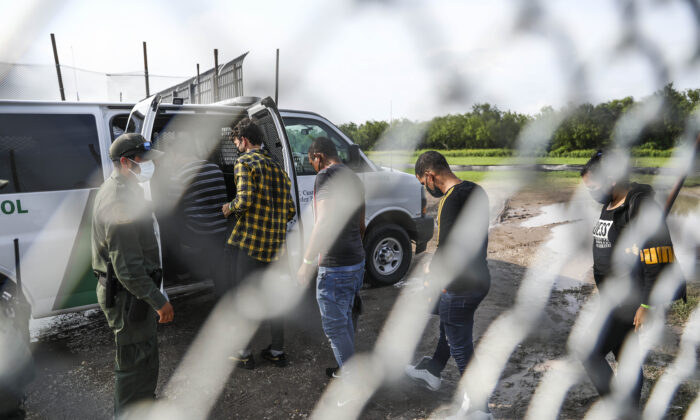 The Biden administration’s Department of Homeland Security (DHS) announced on Sept. 29 that it intends to issue a new memo scrapping the “Remain in Mexico” immigration program implemented by former President Donald Trump despite a Supreme Court ruling that the program was to be reinstated.

Also known as the Migrant Protection Protocols (MPP), the “Remain in Mexico” program centers around making some immigrants who seek asylum wait in Mexico while their claims are heard in the United States.

The program was launched in January 2019 under the Trump administration and was widely credited by proponents for the decline in illegal border crossings.

Mark Morgan, who was acting commissioner of Customs and Border Protection at the time, told The Epoch Times that the MPP was ​​”the most significant game-changer” and largely responsible for a 75 percent drop in such crossings.

However opponents, including Democrat leaders, have argued that the immigration system needs to be completely overhauled, and have slammed the MMP as “inhumane” and “dangerous” to illegal aliens who are at greater danger of exploitation by cartels and criminal organisations in Mexico.

MMP was swiftly suspended by President Joe Biden on his first day in office in January, along with several other Trump-era immigration policies.

Although DHS issued a memo ending the program in June, a Texas-based federal judge ruled that the MPP must be restarted and placed an injunction that required the department to work in “good faith to re-start MPP.” DHS appealed that injunction but was blocked by the Supreme Court in August.

“The Department of Homeland Security intends to issue in the coming weeks a new memorandum terminating the Migrant Protection Protocols (MPP),” the DHS announcement reads.

Republicans decried the move. GOP members of the House Homeland Security Committee said it was “negligent and irresponsible,” adding: “Like much of the rhetoric coming out of the administration, this action flies in the face of our homeland security and foundation of laws.”

DHS said that in the meantime, it will continue working in good faith to re-start MMP in compliance with the Texas judge’s order and is engaged in ongoing diplomatic talks with Mexico.

But according to court documents filed this week, Mexico has so far been resisting the rebooting of the program and Biden is yet to send a single illegal immigrant back to the country.

“Simultaneously, the Department has instituted an interagency Task Force to efficiently rebuild the infrastructure and reapportioning the staffing that will be needed to restart MPP once that concurrence has been obtained. Among many other steps, the Task Force is updating policies and procedures to account for COVID-19 and preparing to put in place contracts to rebuild the soft-sided Immigration Hearing Facilities used for court proceedings associated with MPP,” DHS added.

The department noted its commitment to building a “safe, orderly, and humane immigration system that upholds our laws and values,” stating that it will continue to process immigrants in accordance with U.S. law.

The memo comes at a time when border patrol agents are buckling under the weight of increasing illegal immigrant crossings that show no sign of slowing down. Agents made over 200,000 arrests at the southern border alone in August, one of the highest months on record.