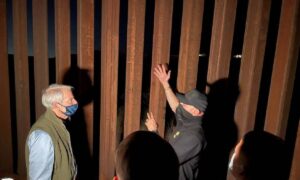 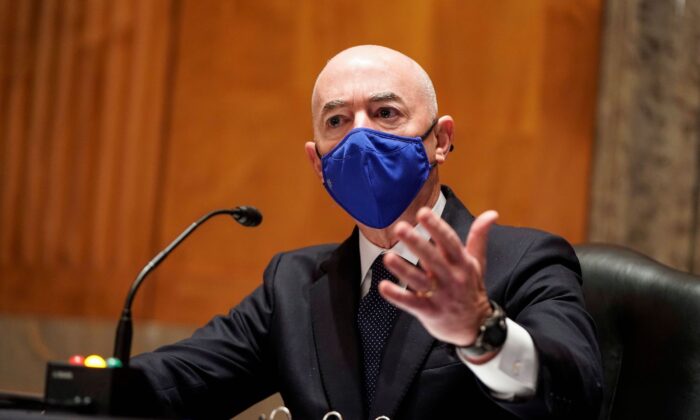 DHS Secretary: Border Is Closed but Children Won’t Be Expelled

Department of Homeland Security (DHS) Secretary Alejandro Mayorkas says the U.S.–Mexico border is closed, although unaccompanied children who unlawfully cross into the United States won’t be turned back.

“We are expelling families. We are expelling single adults. And we’ve made a decision that we will not expel young, vulnerable children. I think we are executing on our plans​,” Mayorkas told NBC News’ “Meet the Press” on March 21.​

Mayorkas was then asked by Chuck Todd, the host, about whether the policy encourages parents in Mexico and other countries to send their children alone to the border.

“We have a short-term plan, a medium-term plan, and a long-term plan, and the president and I have spoken to this repeatedly. Please remember something: That ​President ​[Donald] ​Trump dismantled the orderly, humane, and efficient way of allowing children to make their claims under United States law in their home countries​,” the secretary said, without elaborating.

Mayorkas’s appearance followed a week in which the press began criticizing the Biden administration’s border policies. President Joe Biden’s immigration policies also have been blasted by Trump administration officials and Republicans, who have said that they’re weak and encourage illegal immigration.

The Trump administration’s Migrant Protection Protocol (MPP) program has been touted as the most effective measure to deter illegal border crossings and meritless asylum claims. But Biden moved to rescind a series of Trump-era policies starting on Jan. 20, including MPP, and also indicated that he supports expanded pathways to citizenship for illegal immigrants.

But Mayorkas said the border is not open.

“I​n the meantime, we will not expel into the Mexican desert, for example, three orphaned children whom I saw over the last two weeks. We just won’t do that. That’s not who we are​,” he said on March 21. ​

Under an anti-trafficking law, unaccompanied minors from Central America and other noncontiguous countries haven’t been turned back into Mexico for decades.

In February, Border Patrol apprehended more than 100,000 illegal border crossers, almost triple those of last February, according to Customs and Border Protection (CBP). More than 9,200 were unaccompanied minors, almost 19,000 were individuals within a family unit, and nearly 69,000 were single adults.

In the busiest sector for illegal crossings, the Rio Grande Valley, Texas, more than 10,000 border crossers were apprehended last week, with over 2,000 on March 18 alone.

In an interview last week with ABC News, Biden said the border is closed and called on people not to show up at the border.

“We are safely processing the children who do come to our border. We strongly urge, and the message is clear, not to do so now. I cannot overstate the perils of the journey that they take,” Mayorkas said.​

Mayorkas told CNN later on March 21 that the agency set up three new facilities in the past week.

“We established three new facilities last week. … We are working on the system from beginning to end. We are working around the clock 24/7,” he said. “We have dealt with surges in the past, and the men and women of Department of Homeland Security will succeed.”

At the same time, members of the media have raised red flags about how the administration is handling press access. Getty Images photographer John Moore over the weekend said that the press has been provided “zero access” to the border, and photographers have been forced to shoot photos from the Mexican side of the border.

“I respectfully ask US Customs and Border Protection to stop blocking media access to their border operations,” Moore wrote on Twitter on March 19. “I have photographed CBP under Bush, Obama and Trump but now – zero access is granted to media. These long lens images taken from the Mexican side.”

Meanwhile, there have been reports that Border Patrol officials have been muzzled by DHS officials about the situation at the border.

The Epoch Times reported last week about how the Mexican cartels are using wristbands on the illegal immigrants as a way to track payments and border crossings. If an individual can’t pay the required fee to cross, the cartel has details of their family members at home, as well as their contact details in the United States.

On March 21, The Epoch Times observed two van loads of mostly family units being dropped off by Border Patrol at a local NGO tent facility in downtown McAllen, Texas, across the road from the Greyhound bus station. It’s unclear when the individuals crossed the border.