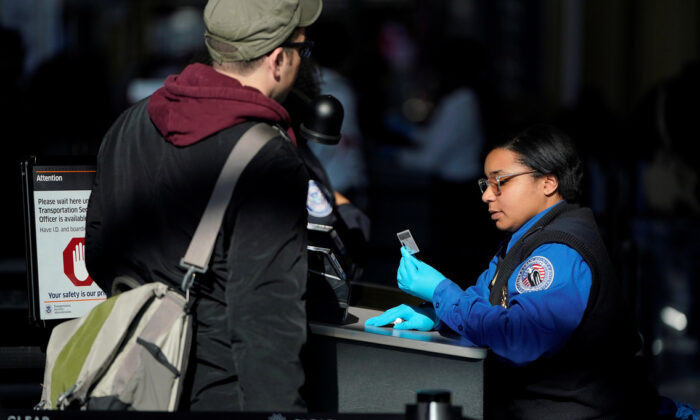 An employee with the Transportation Security Administration (TSA) checks the documents of a traveler at Reagan National Airport in Washington on Jan. 6, 2019. (Joshua Roberts/Reuters)
Politics

The Department of Homeland Security (DHS) is proposing a new regulation that may require all travelers, including U.S. citizens, to be photographed when leaving or entering the country, in a bid to increase security and safety efforts.

DHS, in a filing, said it’s required by statute to develop and implement a biometric entry-exit data system. They said the proposed system, which would utilize facial recognition, “would help prevent persons from attempting to fraudulently use U.S. travel documents and identify criminals and known or suspected terrorists.”

Under existing law, U.S. citizens or lawful permanent residents entering or exiting the country aren’t required by Customs and Border Protection (CBP) to have their pictures taken. If travelers do agree to get their photo taken, CBP discards them within 12 hours of identity verification, according to the department.

The proposed regulation aims to amend the current regulations to “provide that all travelers, including U.S. citizens, may be required to be photographed upon entry and/or departure,” according to the filing.

Spokespeople at DHS and CBP didn’t respond to multiple requests by The Epoch Times seeking additional details of the proposal.

The new regulation, slated to be issued in July 2020 by the department, would be part of a broader system to track travelers as they enter and exit the United States. Some aliens, under law, are required by the CBP to provide biometric identifiers to confirm their admissibility at specified airports.

The public typically has 30 to 60 days to comment on a proposed U.S. regulation. The federal agency then needs to review and respond to comments, a process that can be time-consuming for major regulations.

The Trump administration also said in its regulatory agenda that it plans to issue a separate fast-track regulation this month that would allow the entry-exit project to move beyond pilot status. President Donald Trump has made combating illegal immigration a key part of his campaign and presidency.

CBP, which is part of Homeland Security, has already conducted pilot programs that collect photographs and fingerprints from foreign travelers.

A 2018 internal audit found technical and operational problems during a pilot program at nine U.S. airports. The problems raised questions about whether DHS would meet a self-imposed deadline to confirm all foreign departures at the top 20 U.S. airports by the fiscal year 2021.

The nonpartisan Pew Research Center estimated in 2006 that 45 percent of immigrants in the United States without legal status entered on a valid visa, but didn’t depart when it expired.

Meanwhile, Trump recently said he will designate Mexican drug cartels as terrorist groups for their role in the trafficking of narcotics and people, prompting a speedy request for talks by Mexico.

“They will be designated,” Trump said in an interview with Bill O’Reilly that aired on Nov. 26. “I have been working on that for the last 90 days. You know, designation is not that easy, you have to go through a process, and we are well into that process.”