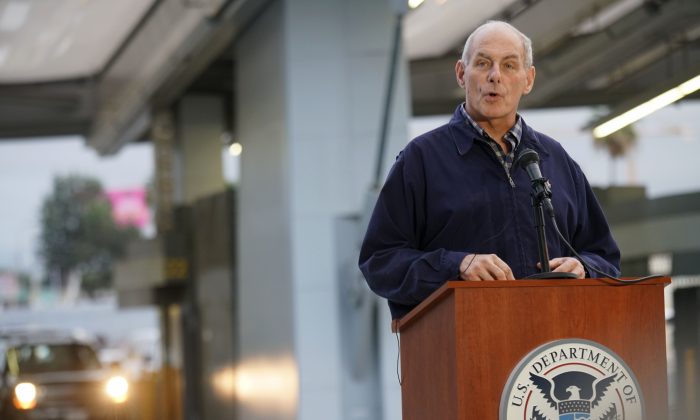 U.S. Department of Homeland Security Secretary John Kelly is rejecting the term “roundup” for efforts to deport people in the country illegally.

Kelly, visiting the California-Mexico border on Friday, was asked whether the Trump administration has stepped up immigration enforcement.

He said authorities are simply executing the law.

Immigration and Customs Enforcement officials did arrest about 160 people during a five-day sweep in Southern California aimed at illegal immigrants with criminal histories and deportation orders.

But ICE officials say that sweep was long planned and routine.

“What I saw today, the professionalism that I observed in a very potentially dangerous environment, gave me great pride,” Kelly said. “The people who ICE apprehended are people who are here illegally—and then some,” he said, as reported by the San Diego Union-Tribune.

“Went to one house, knocked on the door, and took a particularly bad individual, a male into custody,” he also elaborated.

“It’s inconceivable to me that people who are sworn to protect their communities would not want someone, anyone to remove criminals from their communities and send them somewhere else,” he added. “I’m stunned when people say, well, we’re not going to cooperate with you even in the event of convicted criminals.”