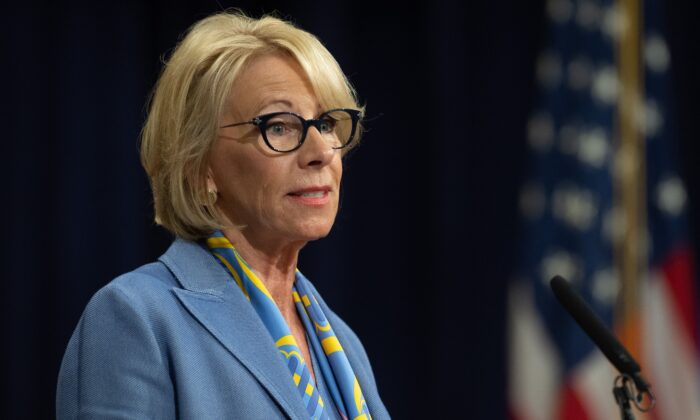 Secretary of Education Betsy DeVos speaks during the Summit on Combating Anti-Semitism at the Department of Justice in Washington on July 15, 2019. (SAUL LOEB/AFP/Getty Images)
US News

The Trump administration is expanding educational access to students and workers with a focus on science, technology, engineering, and math (STEM) education—via $123 million worth in new grant awards.

The funds, to be sent to 41 school districts, nonprofit organizations, and state education agencies across the United States, are part of the Education Innovation and Research (EIR) program. Education Secretary Betsy DeVos made the announcement on Sept. 27.

The grants, according to the education department, will “provide funding to create, implement, or take to scale an evidence-based innovation to improve academic achievement for high-need students, and a rigorous evaluation so that others may learn from its results.”

They include over $30 million in awards to eight grantees serving rural areas and also incorporate more than $78 million to 29 grantees focused on STEM education. More than 85 percent of the funded STEM projects include a focus on computer science, according to the department.

The education expansion efforts were spearheaded by adviser to the president Ivanka Trump, according to the White House. President Donald Trump signed a memorandum in 2017 aimed at increasing student’s access to STEM education.

In a statement, DeVos touted the EIR program as a plan that would offer different opportunities and approaches to student education.

“For too long, the one-size-fits-all approach to education has failed too many students,” said DeVos. “Through the EIR program, grantees have the opportunity to rethink education. … I’m excited to see states, school districts and nonprofits proposing more creativity, innovation, and personalization on behalf of students.”

The grantees, from different states across the United States, include nonprofit BSCS Science Learning, the Small School Districts’ Association, the Computer Science Teachers Assocation LLC, and many more.

The individual grant amounts range from $1 million to more than $8 million, according to a list provided by the education department.

In December 2018, the Trump administration released its five-year STEM Education Strategic Plan. That plan, according to the White House, is based on “a vision for a future where all Americans will have lifelong access to high-quality STEM education and the United States will be the global leader in STEM literacy, innovation, and employment.”

The administration has also helped secure the reauthorization of the Carl D. Perkins Career and Technical Education Act, which authorizes over $1 billion in funding each year for states to focus on vocational and career-focused education programs. The act affects 11 million students across the nation.