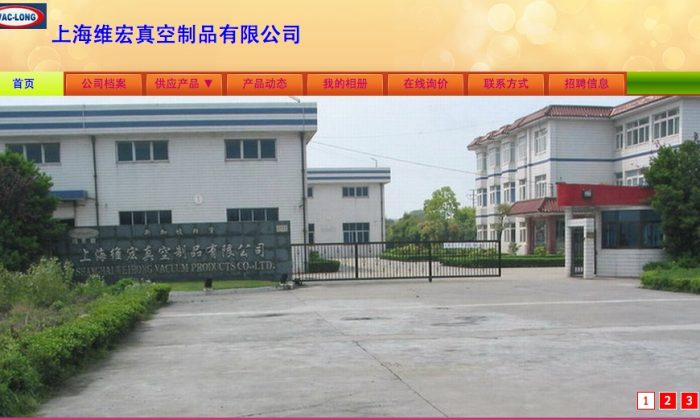 Screenshot of Weihong Vacuum Products Company profile on alibaba.com, with the company buildings seen before the demolition that occurred on May 7. (Epoch Times)
China

In the wee hours of May 7 the factory buildings of Weihong Vacuum Products Company, a Taiwanese enterprise located in Shanghai, were forcibly demolished by a local development firm without warning.

Ye Huide, President of the Association of Taiwanese Businessmen in Shanghai, told a reporter from the Central News Agency on May 9 that the local government was mediating and had decided that the development firm, Shanghai Huige Real Estate Development Limited Company, should pay compensation.

However, Weihong said on May 10 that Shanghai Huige had not agreed to compensate nor had they set a date for the next mediation session.

According to one of the Taiwanese managers of the factory, about 7 years ago the former industrial district was re-zoned as residential. During those years, however, Weihong was unable to reach an agreement with the Shanghai Huige Company on compensation for demolition and relocation.

In fact, the case was still being mediated when Weihong’s over four thousand square meters (approximately 43,000 square feet) of factory buildings were flattened after midnight on May 7 by Shanghai Huige .

“Their purpose was to make it a done deal and their behavior was simply criminal,” said the manager.

“Now the company’s important documents and materials in the computers are all buried in the rubble, and the factory cannot continue with its production. The employees worry that they will not get their salaries, and the customers who can’t get goods on schedule are all protesting this situation,” he said.

“So,” he continued, “the company is now in a miserable predicament. Weihong must take care of the employees and make arrangements for them first, however, before it gets compensation from the Shanghai Huige Company.”

Written in English by Barbara Gay.