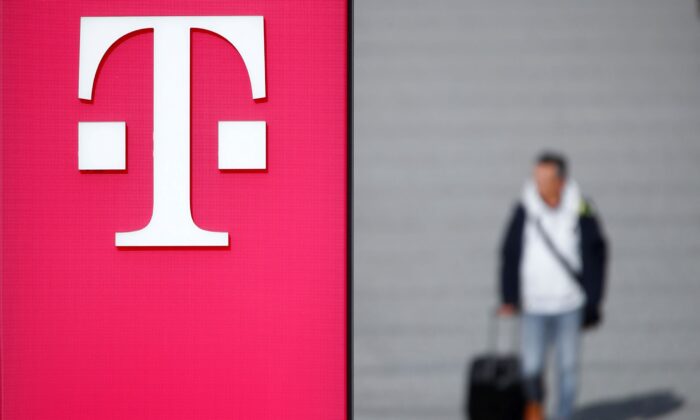 A man walks past the logo of Deutsche Telekom AG at the headquarters of German telecommunications giant in Bonn, Germany, on Febr. 19, 2019. (Wolfgang Rattay/Reuters)
Tech

BERLIN/TOKYO—Deutsche Telekom has struck a share-swap deal with Softbank Group to increase its stake in U.S. unit T-Mobile and sold its Dutch unit in a major restructuring that strengthens the German group’s transatlantic focus.

As a result of the two deals announced on Tuesday, Deutsche Telekom will raise its stake in T-Mobile US by 5.3 percent to 48.4 percent, bringing CEO Tim Hoettges closer to his goal of securing direct control over the $170 billion U.S. telecoms operator.

Softbank will in return receive cash and a 4.5 percent stake in Deutsche Telekom, establishing a direct shareholding relationship after the Japanese group sold its U.S. Sprint unit to T-Mobile in a deal that closed in early 2020.

The latest transactions seek to lock down that deal by bringing Deutsche Telekom within touching distance of majority ownership over T-Mobile US—which accounts for three-fifths of group sales and is its most profitable unit.

For Softbank founder Masayoshi Son, the share swap deal substitutes a residual stake in the U.S. business for a strategic holding in Deutsche Telekom, which is also present in a dozen European countries.

“This is a very attractive transaction for Deutsche Telekom and its shareholders to further benefit from the value creation potential in T-Mobile US and beyond,” Hoettges said.

“But we are not just increasing our stake in T-Mobile US—we are welcoming SoftBank as a new key investor and strategic partner for Deutsche Telekom.”

Softbank’s Marcel Claure said: “This is a landmark transaction that is a true win-win-win for our portfolio companies, SoftBank and Deutsche Telekom.”

Shares in Softbank, which is the world’s biggest tech investor through its Vision Fund portfolio, rallied by 10 percent on the news in Tokyo, while Deutsche Telekom was up 2.4 perecnt in pre-market trading in Frankfurt.

Deutsche Telekom acquired control of the Dutch business from Sweden’s Tele2 in 2018 but never considered the unit, which ranked a distant third behind KPN and Vodafone Ziggo, as a core asset.

Deutsche Telekom will invest some of its 3.8 billion euros in proceeds from the Dutch deal to raise its stake in T-Mobile US. Sweden’s Tele2, which had retained a 25 percent stake in T-Mobile Netherlands, also sold out.

Still, with Deutsche Telekom carrying a debt load of nearly 130 billion euros, the extent of its existing leverage meant it was always going to be hard to pay cash to gain majority control over T-Mobile US.

In return, Softbank will sell around 45 million T-Mobile US shares to Deutsche Telekom at an average price of $118 per share. That compares to last week’s closing price for T-Mobile US of $136.

In addition, Deutsche Telekom will buy around 20 million shares in T-Mobile US from Softbank with the proceeds from the Dutch sale—adding to the cash windfall for the Japanese investor.

By Douglas Busvine and Tim Kelly