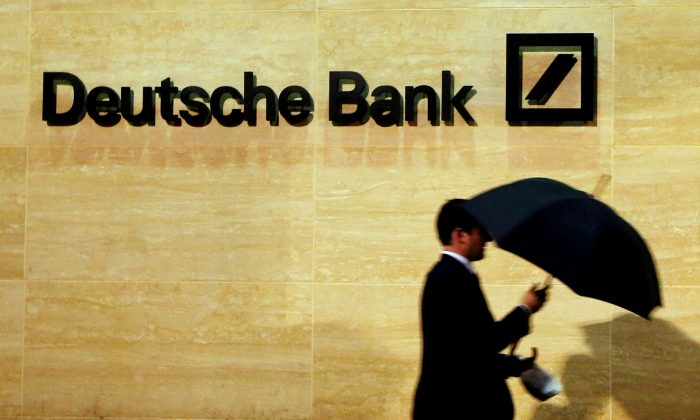 FRANKFURT/LONDON—Deutsche Bank has begun clearing a “large part” of new euro-denominated derivatives trades in Frankfurt instead of London, a spokesman confirmed on  July 30 as a key Brexit battleground in financial services heats up.

The shift by Germany’s largest bank will help Deutsche Boerse’s efforts to attract a large part of the euro clearing market from London as Britain exits the European Union.

Clearing ensures a transaction is completed, even if one side of the deal goes bust.

The worry for the City of London is that if chunks of clearing move elsewhere, other activities like trading and jobs could follow, eating away at Britain’s biggest economic sector.

The move is largely symbolic and was widely expected, given that Deutsche Bank’s home base is in Frankfurt, where the bank is also transferring some other activities due to Brexit.

The Deutsche Bank spokesman said no jobs were being transferred and that the bank was effectively pushing a different button to route the clearing to Eurex, Deutsche Boerse’s clearing division.

International banks with European bases in London have already been opening hubs in the EU to avoid Brexit disrupting their business.

The European Central Bank in Frankfurt told Reuters last week that being connected to local market infrastructure like clearing is a requirement for a eurozone license.

The ECB declined to comment on July 30 on Deutsche Bank’s shift in euro clearing.

A spokeswoman for Eurex said that it now has a market share of 8 percent of euro clearing, up from virtually zero a year ago, still tiny compared with LCH.

The shift in Deutsche Bank’s clearing was first reported by the Financial Times.

Deutsche Boerse has set up a clearing business model similar to that of LCH by introducing a profit-sharing scheme last October to attract interest rate swap clearing.

There are now 29 firms in the scheme with more to come.

“Our focus for the next six months will be to increase buy-side activity based on the good price quality provided by the banks participating in our partnership program,” Eurex said.

The ECB has long wanted euro-denominated clearing relocated from London to the eurozone, arguing it should have some oversight, given that it would be called on to inject euros in the market if a clearinghouse got into trouble.

The EU is in the process of approving a draft law that will mean direct EU oversight of LCH in London after Brexit if it wants to continue clearing euro transactions for customers in the bloc, otherwise clearing would have to relocate to the eurozone.

Officials at the Bank of England, which regulates LCH, have argued that splitting euro clearing would fragment markets and bump up costs for users, a view disputed by Eurex.

But industry officials say a shift in some volume could even help LCH by making forced relocation less pressing.