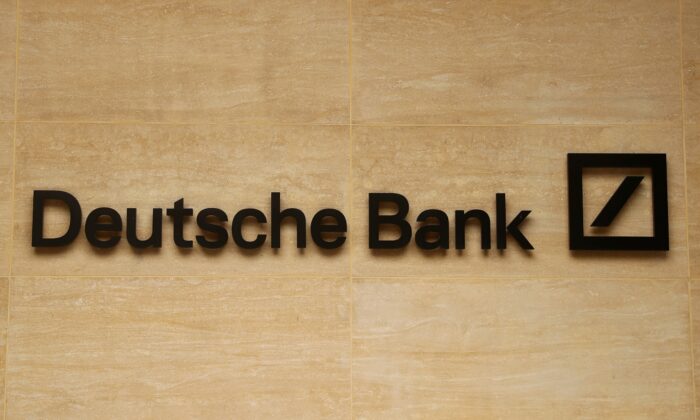 The logo of Deutsche Bank on a company's office in London, Britain, on July 8, 2019. (Simon Dawson/Reuters)
Business & Economy

FRANKFURT—Deutsche Bank said on Friday that it would nominate Dutch businessman Alexander Wynaendts as the next chairman of its supervisory board, marking a new era for Germany’s largest lender.

The former chief executive of Aegon will succeed Chairman Paul Achleitner, one of Germany’s most prominent bankers. He plans to step down in May after 10 difficult years that saw two chief executive changes, billions of euros of losses, and huge fines.

The European Central Bank has been pressuring Deutsche Bank to name a candidate so that it can have time to vet them and provide for an orderly transition.

“Alex Wynaendts has exactly the right personality and skills to ensure a continued trustful working relationship between both boards at Deutsche Bank,” Achleitner said in a statement.

Achleitner’s departure will mark the end of particularly turbulent decade for Deutsche Bank.

The bank has returned to profit, but remains under the close watch of regulators who guard the health of the global financial system, of which the bank, as one of the world’s biggest lenders, forms a critical part.

The appointment of Wynaendts, a Dutchman, is a surprise.

Achleitner had long preferred that a current Deutsche Bank supervisory board member succeeds him, but the chances of an outsider taking on the role had recently dimmed.

That is because a leading choice for the job, Theodor Weimer, who sits on the supervisory board, is also chief executive of Deutsche Boerse. Regulators have said privately that they would not allow him to hold both posts at once.

Deutsche Bank said that as CEO of Aegon from 2008 to 2020, Wynaendts “redefined Aegon’s strategy, successfully transforming the company into a client centric, purpose-driven, and profitable organization.”

He is on the boards of Citigroup, Uber Technologies, and Air France-KLM. He will step down from Citigroup’s board.

In 2017, the bank was fined $7.2 billion in the United States for its role in the mortgage crisis, nearly toppling the bank.

Regulators have also fined and criticized the bank for lapses in controls to prevent money laundering.

In 2018, Achleitner installed CEO Christian Sewing, who has enacted steep cuts, including plans to shed 18,000 staff. The bank has invested in money laundering controls, posted five quarters of profit, and received upgrades from ratings agencies.

By Tom Sims and Frank Siebelt