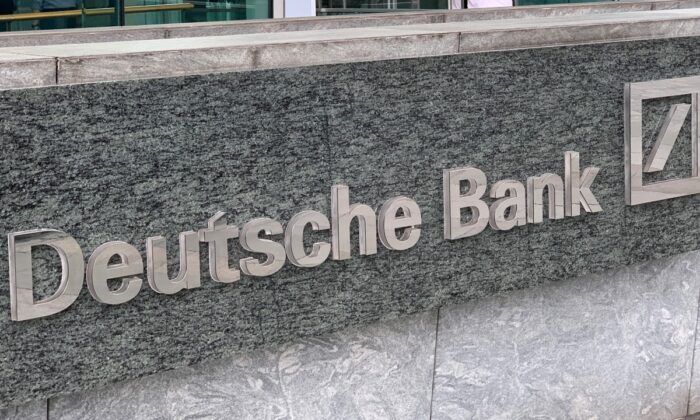 The logo of Deutsche bank is seen in Hong Kong, on July 8, 2019. (Tyrone Siu/Reuters)
Economy

Deutsche Bank has projected that a “more severe recession” is likely to occur in the near future and earlier than it had previously predicted amid aggressive interest rate hikes by the Federal Reserve and signs of an economic slowdown.

“More than two months ago, we forecasted that the U.S. economy would tip into a recession by end-2023,” Deutsche Bank Chief U.S. economist Matt Luzzetti wrote in a note to clients on Friday.

“Since that time, the Fed has undertaken a more aggressive hiking path, financial conditions have tightened sharply and economic data are beginning to show clear signs of slowing. In response to these developments, we now expect an earlier and somewhat more severe recession.”

As a result, Luzzetti said he now sees U.S. gross domestic product (GDP) growth—an extensive measure of economic activity in the country—coming in at “sub-1 percent” in the first half of next year.

This will be followed by a 3.1 percent contraction in the third quarter of 2023, the economist wrote. Luzzetti had previously estimated that would happen a quarter later.

In the fourth quarter of 2023, Luzzetti expects growth to contract by another 0.4 percent.

“The upshot is that the economy is likely to contract next year by about 0.5 percent,” Luzzetti said. “A more severe downturn leads to a higher unemployment rate, which peaks near 5.5 percent. The weaker labor market helps to guide inflation closer to target by 2024, though we still anticipate a nearly half percent overshoot at that point.”

The 12-month Consumer Price Index (CPI), a measure of inflation, reached 8.6 percent year-over-year in May, the most since December 1981. Luzzetti said he sees the CPI peaking at 9 percent in the third quarter of this year.

The bleak forecast from Deutsche Bank comes as Americans are battling with inflation levels that are at 40-year-highs, prompting the Federal Reserve on June 15 to raise the benchmark interest rate by 75 basis points; the largest rate hike since November 1994, as part of the central bank’s attempts to tame higher prices.

In March, the Fed raised interest rates for the first time since 2018, with officials raising rates by 25 basis points. They again raised them last month by a half percentage point.

On Friday, Fed officials promised to fight inflation unconditionally while acknowledging that its policy of raising interest rates will result in some damage to American households and the economy.

“The Committee is acutely aware that high inflation imposes significant hardship, especially on those least able to meet the higher costs of essentials,” the monetary body said in a June 17 Monetary Policy report. “The Committee’s commitment to restoring price stability—which is necessary for sustaining a strong labor market—is unconditional.”

While both Fed officials and the Biden administration have vowed to do all they can to bring down inflation, Ed Yardeni, president and chief investment strategist of Yardeni Research, has taken aim at the central bank over its “lame response” to tackling inflation.

“Perhaps the most important similarity between the 1970s and recent events is the lame response of the Fed to the wage-price-rent spiral. The Fed was well behind the inflation curve during most of the 1970s and is now once again,” Yardeni said in a June 15 note.