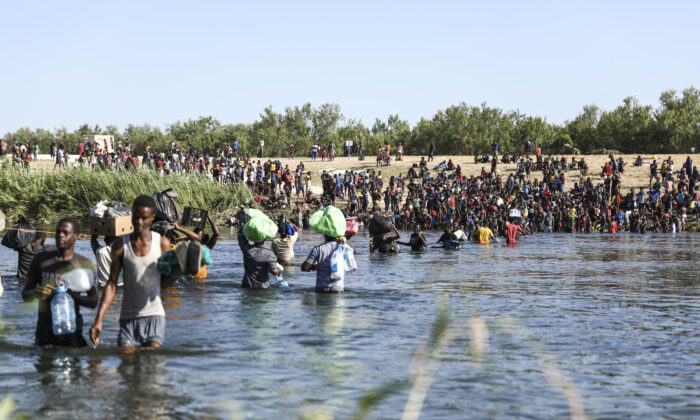 There are forces that wish to destroy America. Some of them are visible and some are stealth.

The visible forces include terrorists and certain nation states like Iran. Radical Islamic preachers cry “death to America” in their sermons, encouraging martyrdom through suicide bombings. Sept. 11 was their crowning achievement, so far. There will likely be other attacks. Some of our military leaders have so predicted. China might also make the list, if not as a destroyer, then as a nation that wants to supplant America as the world’s top economic and military power.

Those who would destroy by stealth include undocumented immigrants flowing across our southern border. Their intention may not be to destroy America, but that will be the effect if we don’t quickly stop the influx and discourage others from coming. It’s almost laughable to hear some in the liberal media claim we have a “moral obligation” to help immigrants when we are ignoring the plight of women in Afghanistan and so many other areas to which the word “moral” might rightly be attached.

Reaction to the open border has been as predictable as the coming of the fall season. Some Democrat progressives shout racism because the latest flood includes Haitians. Signs rapidly appear. Some say, “stop deportation now!” Where did the signs come from? Who are the people carrying them and where do they come from? Is someone paying them? The media never ask these questions.

Undocumented immigrants are not only attracted by low-paying jobs but by lots of free stuff, like access to healthcare and public schools, all paid for by American taxpayers. If a pregnant non-citizen gives birth on U.S. soil, her child instantly becomes a U.S. citizen with all the benefits of full citizenship.

One of the few political leaders responding to this crisis is Gov. Greg Abbott (R-Texas). Abbott has ordered state police to close off parts of the border because the migrants are violating Texas law. For this he is being pilloried and even sued by the Biden administration, though the White House announced just recently that it would swiftly begin to deport Haitian migrants flooding into Del Rio, Texas. But where’s Vice President Kamala Harris who was assigned to fix our border crisis?

In public schools and too many universities of what I would describe as “lower learning,” America’s history is being re-written to shame young people and load them aboard the progressive train wreck. There are many stories of students returning home and accusing their parents of racism, and worse. The stain of racism can never go away despite the money that has been spent and the programs enacted to help lift descendants of slaves out of poverty and into better lives.

Once more or less united, Americans are now fragmented into groups and those groups are pitted against each other as gladiators once were in the Roman Coliseum. Caesar, we who are about to die, salute you!

Seriously, can we go on like this and think we will pass down anything to succeeding generations that remotely resembles what we received from previous ones, especially those we have honored by calling them “the greatest generation”? What made them great and what makes us a small shadow standing in their historic presence?

Values, morals, and economic principles that transformed this nation from an agrarian society to an industrial powerhouse to now a leader in technology, are all threatened by those who breach our borders.

If we don’t find the national political leadership to do something about our steady decline and defend ourselves, as in warfare (because war is what it is, though it is being fought with different weapons), we are at risk of oblivion. Will we follow the path of other nations that no longer exist or have become shadows of their former selves?