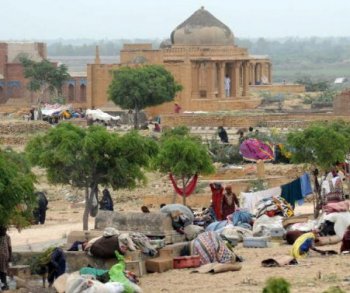 Andrey Volkov
View profile
Follow
biggersmaller
Print
Flood waters that have devastated Pakistan, covering a fifth of the country and leaving at least 1,600 people dead, are now draining into the Arabian Sea.

Challenges of humanitarian relief efforts remain large as millions of people are displaced, hungry, and at risk of disease.

U.N. spokesperson Martin Nesirky told reporters on Tuesday that it would take months to build clinics, health centers, and other public infrastructure.

Among the major health risks in the country are skin infections, malaria, and even snake and dog bites, according to UNICEF.

Anthony Lake, executive director of UNICEF, said in a statement that millions of children are at risk to water-borne diseases and malnutrition rates are at a high level.

“[There is] a potential second wave of disease and misery for millions of families, especially the most vulnerable, children and women,” Lake said.

Flood waters have swept villages, crops and properties. Reaching those affected in the flooded regions has proven to be a mammoth task for aid organizations.