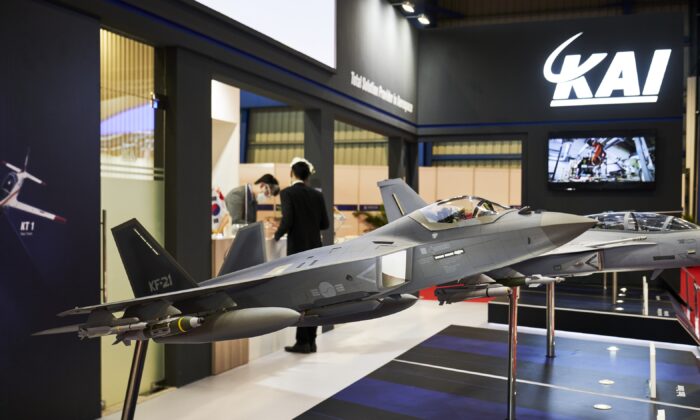 A Korean KF-21 fighter aircraft model on display at the Singapore Airshow, held at the Changi Exhibition Centre in Singapore, on Feb. 15, 2022. (Lauryn Ishak/Bloomberg via Getty Images)
Viewpoints

Despite Everything, Korea’s New Homegrown Fighter Jet Is a Big Deal

So the Republic of Korea (ROK) is both developing an indigenous fighter jet and buying American-made F-35 combat aircraft? The reason has as much to do with ego and ambition as it does with building a modern force to defend the ROK against North Korea and China.

The KF-21 “Boramae” (roughly translated, “young hawk” or “fighting hawk”) started out about a dozen years ago as the KF-X. The KF-21 is an impressive fighter jet, especially for a country that until quite recently only produced foreign-developed fighters under license (such as the F-16). It features a stealthy design, an active electronically scanned array (AESA) radar, and other advanced avionics.

The KF-21 is designated a “4.5-generation” combat aircraft, ostensibly an improvement over standard 4th-generation fighters like the F-16, but not as advanced as the F-22 or F-35 (so-called 5th-generation fighters). This puts the KF-X in roughly the same class as the Eurofighter Typhoon, the Swedish Gripen, or the Russian Su-35—maybe a little better, in fact, because of its stealthiness.

The South Korean government has invested around $8 billion in the KF-21, and the ROK Air Force (ROKAF) expects to buy 120 of these fighters to replace its aging fleet of F-4 Phantoms and F-5s. In addition, Seoul has succeeded in signing up Indonesia as a partner in the program, and Jakarta could acquire as many as 50 fighters to meet its own “IF-X” requirements.

The KF-21’s inaugural flight means that South Korea is the fifth Asian-Pacific country to develop its own supersonic fighter, the others being China, India, Japan, and Taiwan.

Despite this remarkable achievement, the ROK still has a long way to go before it can declare itself a globally competitive aerospace nation.

North America and Europe continue to dominate the state-of-the-art when it comes to military technology. In particular, just a handful of countries in the West—basically, the United States, the USSR/Russia, Britain, France, and Sweden—control the global fighter jet industry.

Many countries have tried to break into this business: Argentina in the 1950s, Egypt and India in the 1960s, Israel and South Africa in the 1980s. None were particularly successful, and some—such as the Indian HF-24 Marut—were spectacular failures.

Even today, perhaps 90 percent of all fighter jets flown by all the world’s air forces are produced by these five countries or based on copies of their planes (such as the Chinese J-7 fighter, a virtual clone of the Soviet MiG-21).

This Western dominance could begin to crumble, however, as Asia ramps up several new fighter jet programs, all of which are intended to come into service over the next 10 to 20 years. Consequently, the center of gravity in the fighter jet industry could gradually begin to shift from the North Atlantic closer to Asia—a development that could have particularly grave consequences for Western Europe’s military aerospace sector and could eventually even challenge U.S. predominance in this sector.

Still, combat aircraft development in Asia has been a decidedly uneven affair. Indonesia, despite the vainglorious efforts of its former president (and aerospace engineer) B.J. Habibie, has been unable to turn itself into an aerospace powerhouse. Taiwan’s indigenous aerospace industry developed a frontline fighter in the 1990s, but it has not produced a new aircraft in over two decades. India has experienced constant delays and setbacks in its indigenous fighter jet sector.

On the other hand, some Asian fighter aircraft producers are obviously on the rise, despite all odds. China has built two fifth-generation fighters, the J-20 (akin to the US F-22) and the J-31 (which closely resembles the F-35). Japan, meanwhile, is leapfrogging ahead to develop a sixth-generation combat aircraft, the F-X.

The ROK is now poised to break into the international fighter jet business. If it and other Asian countries should succeed in becoming major producers—and exporters—of advanced combat aircraft, it would constitute a tectonic shift in the center of gravity in the global fighter jet industry.

At the same time, South Korea (and other Asian arms producers) are finding the barriers to entry incredibly high. The global market for combat aircraft is well-saturated with several types of highly capable competing products, particularly the F-35, which is the only fifth-generation fighter currently being offered for export.

Moreover, the Western aerospace industry has not been sitting on its hands. Europe is currently working on two separate sixth-generation fighter jets, and the United States has several next-generation programs ongoing.

Finally, it is important to note that although it is touted as an “indigenous” fighter, only 65 percent of the KF-21 is of South Korean origin. The rest, including its engines, are foreign-sourced.

It is highly unlikely that South Korea will ever possess the technological base to develop a state-of-the-art fighter totally on its own. Such concerns may be irrelevant, however.

For the ROK, domestic arms production is more than merely achieving a secure domestic source of weaponry. Very powerful “technonationalist” impulses have driven South Korea’s defense-industrialization for decades. As with its electronics and automotive sectors, building up a technologically advanced arms industry has much to do with Seoul’s pride and its striving to become a regional great power. It helps to enhance the nation’s military-political status and raise its profile as an important geopolitical player in Asia.

For all these reasons, therefore, the KF-21 remains a big deal. Despite the fact that the ROKAF continues to buy foreign fighters, South Korea is slowly creating pockets of excellence in armaments production—the others being artillery systems and warships—that can compete on the global market. The ROK is becoming a major arms exporter, and the KF-21 is, at the very least, a demonstration of that resolve.