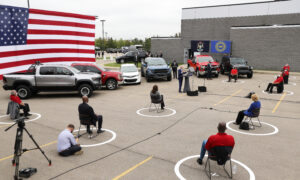 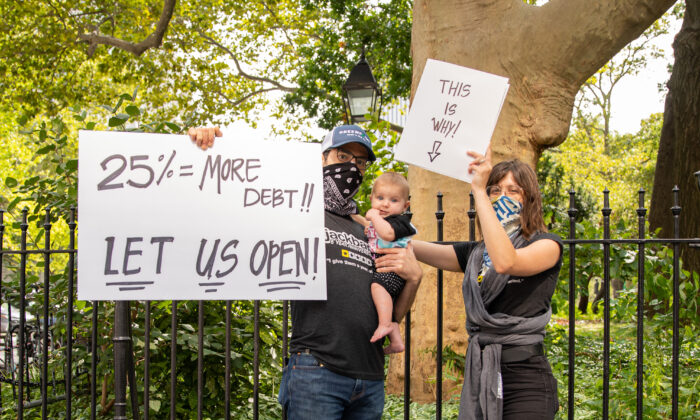 NEW YORK—Desperation fueled around 200 restaurant and bar owners as they gathered in front of City Hall on the morning of Sept. 14.

The rally was a protest against the city’s restrictive lockdown measures and an appeal for additional funding from Congress before the city’s once-thriving restaurant industry is entirely obliterated, demonstrators said.

One issue was the latest directive from New York Gov. Andrew Cuomo, who announced on Sept. 9 that restaurants would finally be allowed to open for indoor dining by Sept. 30, but with a 25 percent occupancy limit and other limitations.

Owners told The Epoch Times the move to allow indoor dining was just too little, too late. They pointed out that other areas outside the city had already allowed 50 percent indoor and outdoor dining, and much earlier.

“We’re here trying to get our voices heard … in hopes the mayor, the governor will listen to us and realize the 25 percent openings are not enough, we need a minimum of 50 and 100 as soon as possible,” Ronan Conlon, owner of Banc Cafe, told The Epoch Times. “We’ve been quiet for too long.”

Conlon, who co-owns another restaurant, said that pre-pandemic, he had about 65 staff in total. Now he has less than 30.

His experience, hardly unique for the city, mirrored what other owners at the protest described. He also complained that restaurants often received no guidance from the city, aside from being allowed to open for outdoor dining and even then they changed the rules “every two days.”

“We’ve toed the line, we’ve done everything they’ve asked us to do,” Conlon said, referring to New York officials. “Now we need them to do what we’re asking them to do, and to represent the people.”

Money from the Paycheck Protection Program (PPP), described as a “loan designed to provide a direct incentive for small businesses to keep their workers on the payroll,” saved many restaurants, at least temporarily.

But owners said the money they received from the program has run out, or is about to. They have no other means of generating enough income to stay afloat.

A recent survey (pdf) by the NYC Hospitality Alliance found that 83 percent of the city’s eateries were unable to pay the full amount of their rent in July, while 37 percent couldn’t pay anything.

“The people that came here today are independent restaurant operators … these people cannot borrow money,” he said. “No one will lend to us because our revenues are so diminished … our future looks bleak.”

Like others at the protest, he pushed for the passage of the Restaurants Act of 2020.

“While they’re lobbying for financial aid for themselves in our own budgets in D.C., they haven’t mentioned ours. We’re told to go scratch,” he said, referring to officials.

“If you don’t pass the restaurant act in Congress in the next six weeks, this restaurant industry in New York City is going to be decimated. It’s going to take years to recover.”

The bill would temporarily provide funding for the Restaurant Revitalization Fund, “from which the Department of the Treasury shall make grants to eligible food and beverage purveyors to cover specified costs,” according to its text.

The Treasury, under the bill, must prioritize “awarding grants to marginalized and underrepresented communities, and only award grants to eligible food and beverage purveyors with annual revenues of less than $1.5 million.”

“I don’t know how you can operate a business with 25 percent of the revenue, or 25 percent of the customers without increasing the prices 400 percent,” Brock Pierce, a child actor and entrepreneur now running as an independent candidate for the 2020 presidency, told The Epoch Times. “The numbers don’t add up.”

Pierce took part in the the protest and said he supports the owners’ fight.

Restaurants and bars were first ordered to close their doors in March. One owner told The Epoch Times he hasn’t been open at all, in any capacity, since then.

Megan Rickerson, owner of Someday Bar in Brooklyn, said that for her, the issue is more about getting rent relief, adding that she doesn’t think anyone is ready for “completely opening.”

“I know my landlord isn’t getting a mortgage break and he’s trying to help us,” she told The Epoch Times. “But if he’s not getting a break, how is he supposed to give anybody else a break?”

Rickerson said she initially had to furlough everyone and ran the whole bar alone. Later, she received PPP money, but it only helped temporarily. She has been forced to completely change the bar’s menu to run on smaller margins.

“Everything is so tight,” she said. “We’re just doing what we can to have food, to stay open, and to try to survive.”