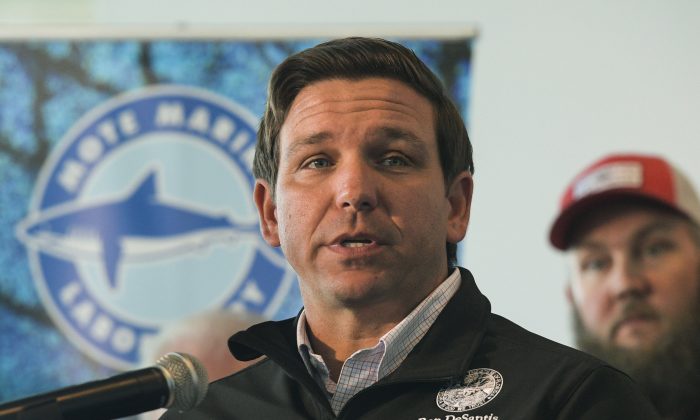 Florida Gov. Ron DeSantis on Sunday called for stronger security precautions for foreign nationals on U.S. military bases following the fatal shooting at the Pensacola naval base on Dec. 6.

The attack on Friday morning by Mohammed Alshamrani, a 21-year-old flight student with the Royal Saudi Air Force, left three dead and eight injured, including two officers who are expected to recover.

Speaking at a news conference, the Republican governor called for more substantial security vetting by the military program that had allowed the Saudi aviation student to train at the Naval Air Station Pensacola.

“You have foreign military personnel coming to our base. They should not be doing that if they hate our country,” DeSantis said.

“I talked with Secretary (of Defense Mark) Esper on Friday and they’re doing a big review about how all this stuff is done in terms of the vetting. But my sense is that more needs to be done, and I think that this is something that should not have been allowed to happen.”

DeSantis continued: “My view is that for us to be bringing in these foreign nationals, you have to take precautions to protect the country. To have this individual be able to take out three of our sailors, to me that is unacceptable, and I think it could have been prevented with better vetting.”

The governor praised law enforcement and the community for the response to the shooting before adding that Alshamrani was “somebody who had a deep-seated hatred for the United States that was pretty clear.”

On Friday, gunman Alshamrani opened fire on three sailors across two floors of a classroom building on the base before he was shot dead by a sheriff’s deputy.

Pensacola base has a long history of offering aviation training to foreign military forces, with Saudi pilots beginning training there in 1995, alongside personnel from Italy, Singapore, and Germany.

While the FBI is still determining whether to classify the shooting as an act of terrorism, White House national security adviser Robert O’Brien on Sunday said it “appears to be a terrorist attack.”

Speaking on CBS’s Face The Nation, O’Brien said: “To me, it appears to be a terrorist attack. I don’t want to prejudge the investigation, but it appears that this may be someone that was radicalized … It’s unclear whether he’s got ties to any other organizations.”

Elsewhere in Sunday’s press conference, DeSantis said Saudi Arabia has pledged to cooperate with the investigation, adding: “My view would be, trust but verify. If they say they’re going to cooperate, make sure they do cooperate and don’t just take lip service and think that that’s enough.”

It comes after President Trump said that King Salman of Saudi Arabia had offered his sincerest condolences to the victims and their families during a phone call on the weekend.

“King Salman of Saudi Arabia just called to express his sincere condolences and give his sympathies to the families and friends of the warriors who were killed and wounded in the attack that took place in Pensacola, Florida,” the president tweeted.

“The King said that the Saudi people are greatly angered by the barbaric actions of the shooter, and that this person in no way shape or form represents the feelings of the Saudi people who love the American people,” he added.