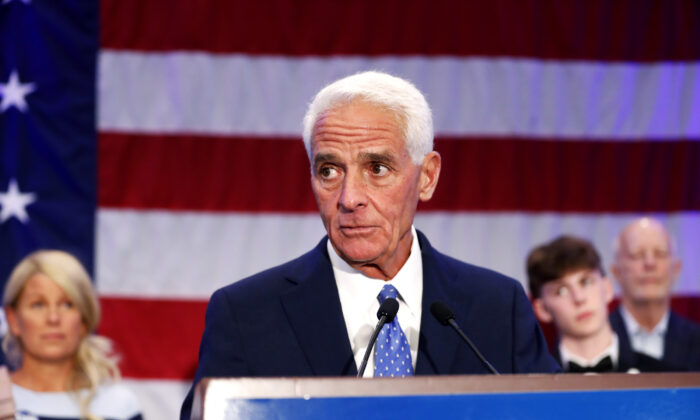 Republicans have struggled to regain the momentum that their midterm primary candidates had in March, when inflation, the border crisis, and crime had Democrats reeling in anticipation of a red wave in November.

Republicans were confident of winning at least a narrow majority in the U.S. Senate, as much as a 25- to 35-seat hammerlock in the U.S. House, and also boosting the number of GOP governors to at least 30 this fall.

Those spring aspirations have since been tempered by a summer surge in enthusiasm among Democratic voters in the wake of June’s Supreme Court’s overturning of Roe v. Wade, slackening inflation, and a concerted effort in campaign rhetoric and White House messaging to identify former President Donald Trump and his supporters as threats to democracy.

The Republican National Committee (RNC) is offering GOP candidates a way to recapture the narrative by reminding voters about how Democrats responded during the COVID pandemic. The tactic is being used in three Florida races, including Republican Gov. Ron DeSantis’s reelection campaign against Democrat Charlie Crist, a former U.S. representative for Florida.

A refocus on lockdowns, shutdowns, economic upheaval, and the angst that fueled the speculative red wave earlier this year could also be effective stump points in the final weeks, the RNC maintains, especially when the candidates’ own stances and statements could be used against them.

That is especially true when it comes to Crist, a 30-year career public official with plenty of verbiage to vet.

When ABC News’ Amy Robach asked Crist, “Where do you stand on vaccine passports and businesses?” he responded: “We should have vaccine passports. I think that’s important,” in a May 14, 2021, interview.

Crist went on to recount meetings with some of Florida’s $8 billion cruise line industry CEOs who didn’t want to risk going to sea without assurances that all passengers and crew were vaccinated.

“If you talk about having 98 percent [vaccinated] and you have 2 percent on the ship that are not vaccinated, you could suffer an outbreak. It would decimate the industry,” he said.

DeSantis, conversely, and with great publicity, prohibited schools, businesses, and government agencies from requiring people to show proof of a COVID-19 vaccination, refused to restrict businesses or to close schools completely during the pandemic, and issued orders against mask and vaccine mandates. He has engaged in high-profile public health policy battles with the Biden administration and school boards, and is widely regarded as second only to Trump among the leading 2024 Republican presidential candidates.

The RNC is also targeting two Florida Democrats running for Congress with their own “lockdown Lib” words.

Republican Scotty Moore is taking on the favored Soto in a Central Florida race made a bit more competitive for a Republican candidate by post-census redistricting.

“The original Lockdown Libs, Florida Democrats, played politics with the jobs, educations and livelihoods of Floridians. Voters will remember that in November,” RNC spokesperson Julia Friedland said in a statement, warning Democrats that “Floridians kept the receipts” from their failed policies.

First-term incumbent Rep. Byron Donalds (R-Fla.) reiterated that this should be the message Republicans rally around in the weeks leading up to Nov. 8.