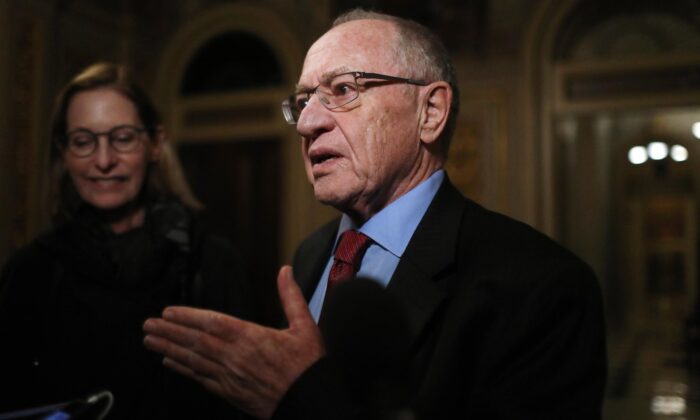 Attorney Alan Dershowitz, a member of President Donald Trump's legal team, speaks to the press in the Senate Reception Room during the Senate impeachment trial at the Capitol in Washington on Jan. 29, 2020. Mario Tama/Getty Images

When professor Alan Dershowitz claimed before the Senate that the Constitution allowed impeachment only for crimes and crime-like activity, I was skeptical.

As he said, most constitutional scholars think the bar is lower. I was among them: In both scholarly and popular articles, I’ve argued that the phrase “high misdemeanors” means what the Founders called breach of trust and we call breach of fiduciary duty.

Yet I knew Dershowitz was correct that the framers wanted the grounds for impeachment in America to be narrower than those sometimes employed in England. So I decided to fact-check his statements.

When a constitutional word or phrase seems unclear, consulting 18th-century law books often is the best way to clarify it. After all, the Constitution is a legal document, the supreme law of the land. Most of its drafters and expounders were prominent lawyers or laymen (such as George Mason, who suggested the “high crimes and misdemeanors” standard) who were legally sophisticated. Surprisingly, however, law professors and other constitutional writers tend to disregard 18th-century legal materials, aside from the commentaries of William Blackstone.

I already was familiar with what the Founders said explicitly about impeachment. As part of my fact check, therefore, I examined a wide range of 18th-century legal writings: court cases, books on criminal law, voluminous legal digests, and statutes.

Conclusion: Dershowitz is essentially correct and I (and most other writers) have been wrong.

The legal materials show that the constitutional phrase “Treason, Bribery, and other high Crimes and Misdemeanors” generally does require serious criminal conduct. It follows that the articles of impeachment against President Donald Trump are legally defective and must be rejected.

Here are the reasons, step by step:

First, the historical records show clearly that the Founders understood the adjective “high” to modify “Misdemeanor” as well as “Crime.” In other words, the Constitution requires a high misdemeanor, not just a misdemeanor.

Although modern Americans think of a “misdemeanor” as a minor offense, 18th-century language was different. Then, the word signified any offense against the public, whether serious or trivial.

The most serious misdemeanor was high treason, traditionally punished by drawing and quartering and forfeiture of property. Next was felony, which included both treason and such offenses such as rape, arson, burglary, and robbery. The traditional punishment for non-treasonous felony was hanging and forfeiture of property—although by the time the Constitution was written, some felons were treated more leniently.

To constitute a high misdemeanor, the perpetrator’s conduct had to be very serious and almost always criminal. As Chambers’s 1778 “Cyclopaedia” explained, “High crimes and misdemeanours denote offenses of a heinous nature, next to high treason.” Similarly, Nicholas Bailey’s 1783 dictionary defined high misdemeanor as “a crime of a heinous nature, next to High Treason.” The 1778 edition of the “Encyclopaedia Britannica” said of the synonym “misprisions” that they were “all such high offenses as are under the degree of capital, but nearly bordering thereon.” Giles Jacob’s popular law dictionary reported the same.

Among the offenses considered high misdemeanors were assault, embezzlement of public funds, a jailor’s extortion of prisoners, jail-break by a non-felon, assisting a duel, knowing receipt of stolen goods, permitting a traitor to escape, and some forms of reckless endangerment.

In the 1790s, Congress enacted several statutes prohibiting the “high misdemeanors” of armed interference with U.S. foreign relations and violent obstruction of federal law. Infractions were punishable by both imprisonment and by stiff fines.

Dershowitz is correct: Without alleging criminal behavior, the articles of impeachment are not legally viable.

Rob Natelson was a law professor for 25 years and is senior fellow in constitutional jurisprudence at the Independence Institute in Denver. His constitutional scholarship focuses on the Founding. He is the co-author of “The Origins of the Necessary and Proper Clause” (Cambridge Univ. Press, 2010).