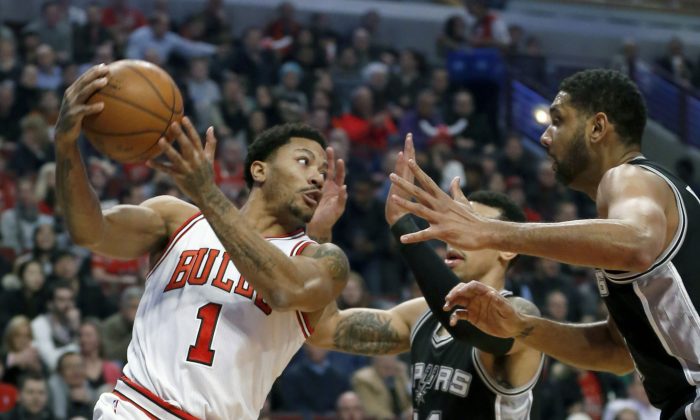 Derrick Rose defended his coach on Thursday night after the Bulls handily beat the defending champions.

“This don’t have anything to do with Thibs at all,” Rose said after the 104-81 win over the Spurs.

“The way that we’ve been playing don’t have anything to do with Thibs. He’s preparing us right. He’s doing everything and did everything possible to prepare us as a coach. It’s up to the players to give that effort.”

Rumors had been flying after the Bulls went through a rough stretch, losing six out of eight games and dropping to fourth place in the Eastern Conference.

Some reports, citing sources, indicated that Tom Thibodeau could be fired if the losing continued for very long. Even if the regular season play turns around, another first-round exit could prompt the same move.

A source close to the Bulls told Sheridan Hoops, for instance, that the Bulls wouldn’t hesitate to eat the remaining money on the coach’s contract (roughly $11 million) if they decide to fire him.

“The feeling among some players in the locker room is that Thibodeau is simply too hardcore, too much of an oddball personality, and runs his best players into the ground both in practices and games,” Chris Sheridan reported.

But Rose came to his defense after the win over the Spurs, and Pau Gasol revealed that the win came after a team meeting in which Thibodeau encouraged players to speak their minds.

“The tone was obviously serious because we’re in a serious mission, a serious situation,” Gasol told ESPN. “So everybody just shared our thoughts. And try to be positive and encouraging to everyone. But it’s time to get it together, it’s time to react and do our best.”

Bulls general manager Gar Forman also said recently that Thibodeau is not on the hot seat.