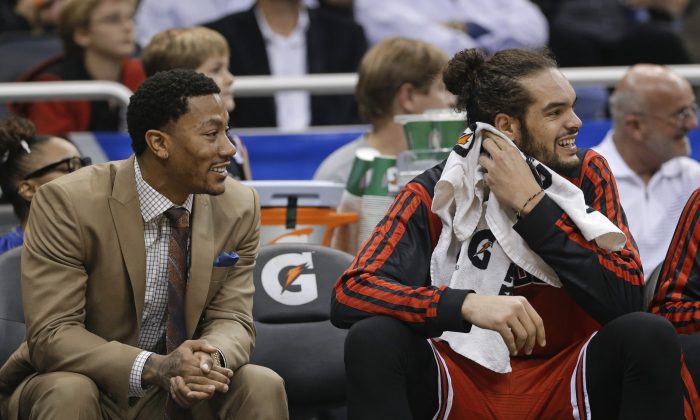 Derrick Rose, the Chicago Bulls guard who has struggled with injuries, is back playing “full contact” five-on-five.

Rose returned last season after missing an entire year due to left ACL surgery. But 10 games in he tore his right meniscus. He missed the rest of the season, and the Bulls were bounced in the first round of the playoffs by the Washington Wizards.

Now, Rose has returned to the five-on-five games at the Berto Center in Chicago. That’s a departure for his usual routine, which is drill and intense conditioning work nea rhis offseason home in Santa Monica, California along with other top stars such as Russell Westbrook and Kevin Love, reported the Chicago Tribune.

“The change in strategy has been seamless. It has allowed Rose to gain confidence and conditioning playing full court against teammates and various Chicago-area types with NBA ties in the suburban practice facility that soon will cede to the Bulls’ new building across the street from the United Center,” the Tribune reported.

“And it has kept Rose closer to Bulls’ personnel, including Jen Swanson. The Bulls hired Swanson last August as their director of sports performance after she worked closely with Rose throughout his ACL rehabilitation at a prominent Los Angeles clinic.”

Rose started taking full contact during the playoff series that the Bulls played against the Wizards. He continued increasing the intensity of the workouts and expanded from one-on-one up to three-on-three to full court, five-on-five.

Three sources say that Rose, the 2011 MVP, is showing “both explosion and speed” in the games.

Rose is planning on participating at the Team USA minicamp, which starts on July 28 and goes through August 1. The pool of players will get whittled down from about 21 to 12.

“I feel bad that these last couple of years have interrupted what should be a sensational career for him. Hopefully, this will be a jump start to the NBA season and maybe we can win the World Cup along the way.”