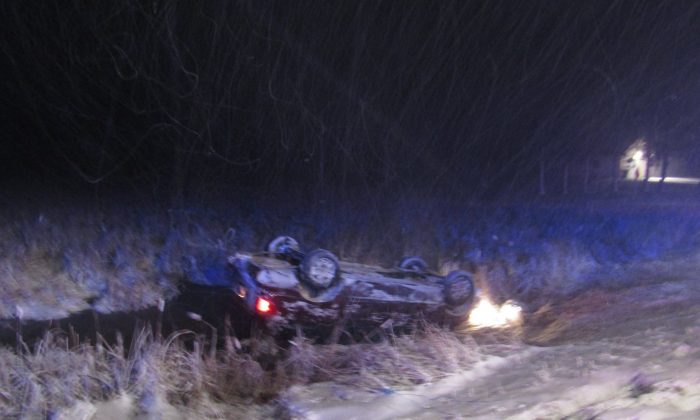 Deputy Called Hero After Saving 3 From Crashed Car in Swamp

Three people trapped in a van after an accident in Minnesota, were rescued by a sheriff’s deputy.

Bill Jensen lost control of his van on an icy road, rolled over, and crashed in a swamp near Cambridge on the freezing night of Monday, Dec. 4. His girlfriend Shorty Nelson and Jensen’s 83-year-old father were also in the van.

“I was sliding, I steered into the slide,” Jensen said, WCCO reported. “I felt myself catch, we were going to be good except the road was exactly one road wide, no shoulder, nothing. We hit it and tumbled upside down.”

The van started to sink into the swamp.

“There was water coming in, it was cold, and we couldn’t get any doors open,” Jensen said.

“I can’t even remember the vehicle rolling and I just thought, ‘Huh, I’m hanging upside down from my seat belt, interesting,’” Nelson said.

She released the seat belt and fell into the water inside the van.

“That was the sweetest voice I had heard in a long time when she [the operator] said, ‘oh, I know exactly where you are. Help is on the way,’” Nelson said.

Schlangen was about 4 miles away and reached the crash scene in about four minutes. He found the van upside down and half submerged in the swamp.

“We’re in here … get us out of here,” screamed the people inside, tapping on the glass.

Schlangen told them to get away from the window.

“I grabbed my baton and just swung as hard as I could against the window,” he said. “It shattered right away, luckily.”

He broke out the back window and, thigh-deep in the swamp, helped the couple out of the car. They told him there was still Jensen’s father inside.

Schlangen crawled halfway into the van and helped the man out.

He let the three into his cruiser to warm up while waiting for an ambulance. The EMS treated the three at the scene.

Schlangen gave the three a ride home and then drove back to the office to change out of the wet uniform.

The three “were very thankful for his [Schlangen’s] actions as they feared they would not get out and they were going to freeze in the van,” the sheriff’s office stated in a release. “The family has called Deputy Schlangen their hero.”