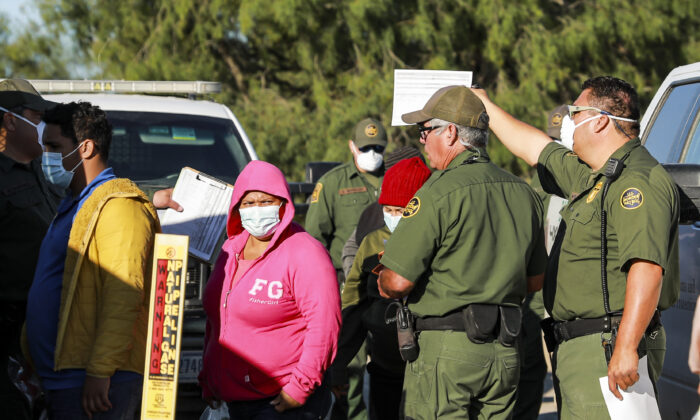 Immigration and Customs Enforcement (ICE), tasked with removing illegal aliens, removed over 20,000 each month in 2019 except for January.

Removals are on track to reach record lows, the data show.

Biden and top officials in his administration, including Homeland Security Secretary Alejandro Mayorkas, have put into place a series of measures to curtail immigration enforcement.

That includes Mayorkas ordering ICE agents to review an illegal immigrant’s record before making any arrests and only arrest those deemed to pose a threat to national security, public safety, or border security.

The new data undercuts that claim.

The number of illegal aliens convicted of a series crime like homicide, sexual assault, or kidnapping and removed was cut by more than half through July 9 when compared to the previous year, and by nearly three times since 2019.

“While the Biden leadership claims that they are focusing ICE more directly on criminal aliens, in reality they’re not even deporting as many serious criminals as they were before. That’s how much of a problem these policies are,” Jessica Vaughan, director of policy studies at CIS, told The Epoch Times.

“The Biden policies appear to have been adopted with the goal of hobbling immigration enforcement, not enhancing public safety or ensuring the integrity of immigration laws or even making better use of government resources,” Vaughan wrote in a blog post analyzing the new numbers.

ICE acknowledged the receipt of emailed questions but did not send answers.

ICE typically releases deportation numbers in December each year. Those should give further insight on how the administration’s policies have impacted immigration enforcement.

Republicans and many critics say the policies have also caused the spike in illegal immigrants crossing the U.S.–Mexico border.

The Biden administration has already set the record for the most apprehensions at the border in a fiscal year and in a calendar year, with two months of numbers yet to be released.

To combat plunging deportations, Congress could mandate ICE boost their detention capacity and use it, or expand the categories of illegal aliens that are mandatory for ICE to remove, Vaughan said.

Outside of that, she predicts more states will take matters into their own hands.

Texas has stepped up immigration enforcement as aliens stream across the border, arresting them on child endangerment and trespassing charges.

Florida barred state agencies from providing support for resettling illegal aliens and appointed a public safety czar to help deal with the problem.