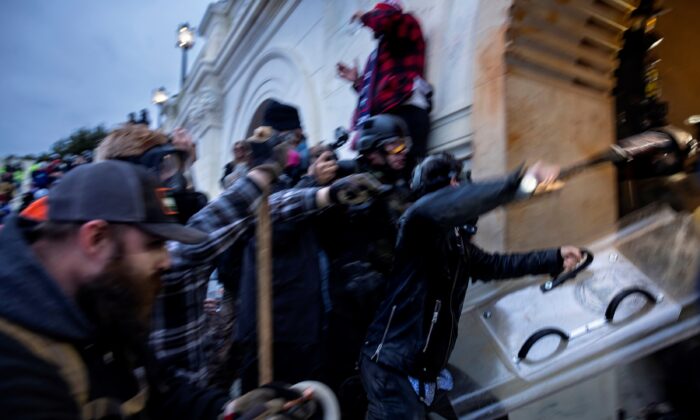 A crowd clashes with law enforcement officers at the U.S. Capitol in Washington on Jan. 6, 2021. (Brent Stirton/Getty Images)
US News

The Department of Homeland Security (DHS) should have taken into account changing circumstances and designated as special the events on Jan. 6, a new report says.

The DHS can designate planned events as special, triggering security planning and other processes. But it didn’t do so for Jan. 6 because officials believed the events didn’t meet the criteria for such a designation.

The Government Accountability Office (GAO) said the lack of designation failed to take into account a shifting environment.

“While election certification by the Congress was a routine event in the past, the threat environment in 2021 was different from past elections. For example, an FBI report warned of calls for violence and for individuals traveling to Washington, D.C. to be ready for ‘war’ at the Capitol on January 6,” the office said in its report published this week.

“The lack of consideration of other factors, such as the large rally at the Ellipse that mobilized to the Capitol, and the climate surrounding the 2020 election demonstrate a gap in the adaptability of how these events are considered.”

Auditors also found that it’s unclear who has the authority to initiate one type of special designation, known as a National Special Security Event (NSSE), for events taking place in Washington.

Governors typically initiate the designation in their states.

“Clarifying and communicating the DHS policy for requesting an NSSE designation for events on federal property in Washington, D.C. will help ensure that responsible entities are aware of their ability to make such a request,” they said.

The watchdog recommended clarifying the process for Washington and reviewing the factors for designations to make sure they “are adaptable to the current environment of emerging threats.”

DHS didn’t agree with the recommendations.

DHS officials said they didn’t want to review the designation factors, claiming the recommendation “appears to be based on a flawed premise.”

They told the GAO that factors such as context and emerging threats are already taken into account in the designation process, that there wasn’t enough time to address the FBI warning from Jan. 5, and that the U.S. Capitol Police department was the lead law enforcement agency.

Jan. 6 saw protesters breach the Capitol during a joint session of Congress, interrupting the counting of electoral votes from the 2020 election. Over 140 officers were injured, over $1.5 million in damage was done, and four people died, including a supporter of former President Donald Trump who was shot by a Capitol Police officer.

Correction: A previous version of this article misstated how many people died during the Jan. 6 Capitol breach. The Epoch Times regrets the error.