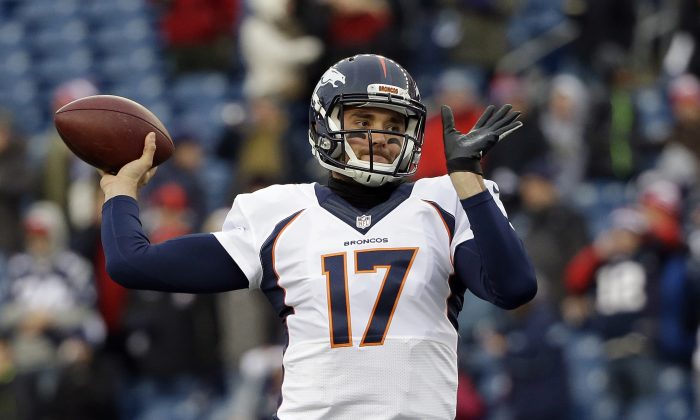 FILE - In a Nov. 2, 2014, file photo Denver Broncos quarterback Brock Osweiler warms up before an NFL football game against the New England Patriots in Foxborough, Mass. Osweiler has waited patiently as Peyton Manning's backup for 2 ½ years. He was disappointed on Sunday, Nov. 9, 2014, when he was all warmed up and ready to go in the game only to see the five-time MVP trot back onto the field. (AP Photo/Steven Senne)
NFL

The Denver Broncos play the St. Louis Rams on Sunday, and here’s some of the latest buzz on the team.

Champ Bailey to retire a Bronco

Likely Hall-of-Fame cornerback Champ Bailey signed a one-day contract with the Denver Broncos and retire with the team.

A news conference will be slated for his retirement on Tuesday, via NFL.com.

He spent 10 of his 15 years in the NFL with the Broncos. During his career, he nabbed 52 interceptions–more than any other active cornerback.

He was selected for the Pro Bowl 12 times.

This season, Bailey joined the Saints as a member of the practice squad but was cut before the season started.

He then confirmed that he would retire.

The Broncos have confirmed that running back Ronnie Hillman won’t play against the St. Louis Rams on Sunday.

He is out with a foot strain and didn’t practice this week.

“Fantasy?…..I could careless….how about get right for next week smh lol ..good win for the real bronco fans tho,” he tweeted.

It’s uuclear when he’ll be back.

Meanwhile, linebacker Nate Irving was placed on season-ending injured reserve, according to the Denver Post.

He suffered from a partially torn medial collateral ligament in his right knee during the loss to the Patriots on Nov. 2.

“The Broncos didn’t originally place Irving on season-ending IR because they needed to wait for the swelling around the knee to go down before they more conclusive tests could be taken. Apparently, more time revealed Irving’s injury was serious enough that he could not return in time to help the Broncos through the final seven weeks of the season, not when it left them short-handed on special teams,” the Post writes.

ENGLEWOOD, Colo. (AP) — The scuffling and shuffling along Denver’s offensive line may not be over.

That lineup isn’t written in indelible ink, however.

“For the most part, I’m trying to find out who those five guys are that we want to finish this year with,” Gase said.

Ramirez and Vasquez are playing out of position after sliding one spot over last week at Oakland to make room for Montgomery at center. Clady (groin) and Franklin (knee) are ailing but will play Sunday.

He might end up being just as big as any of the other additions if he helps stabilize a line that’s given up a trio of sacks on three-man rushes and allowed the running backs to get hit in the backfield too often.

“He did a good job getting to the second level — which when we actually got him that was one of the things we thought he did a great job with — with the Redskins,” Gase said. “And he did a good job as far as directing traffic.

“Now, having Manny next to him, does that help him? Absolutely. Now we really have two centers on the field. They know all the calls, they know what to do.”

Demaryius Thomas has shaken his early season slump the way he usually evades tacklers and gathers speed on his way upfield.

Ever since a distressing September slide in which he had just one TD catch to go with four drops, the Denver Broncos star has been an absolute blur.

Over the past six weeks, he’s become just the ninth player in NFL history to post six straight 100-yard games.

After catching 250 extra balls upon his return from Denver’s bye week, Thomas has held onto the passes that were inexplicably skipping off his hands the first few weeks.

“I just think if I get the ball in my hands, I can do that about every week,” Thomas said of his new 100-yard habit.

“Calvin, he’s the best receiver in the game,” Thomas said, “and if I beat his record, maybe I can get talked about being one of the best.”