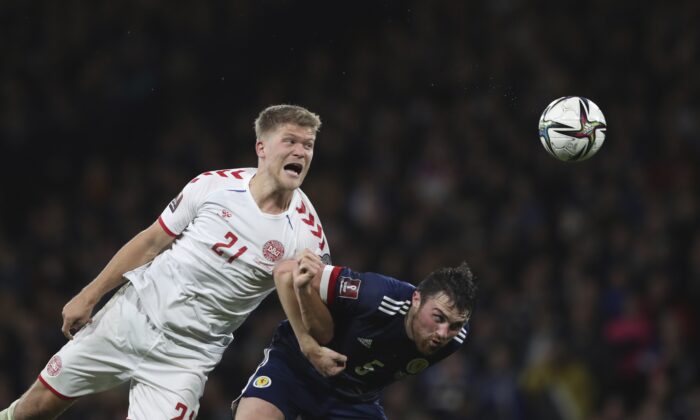 Denmark to Wear Clothes With ‘Critical Messages’ in Qatar

Denmark earned a spot in the tournament last month. In the wake of qualification, the Danish soccer federation said Wednesday it has launched a series of “critical initiatives.”

Qatar has faced criticism amid reports of discriminatory laws and conditions for the migrant workers preparing the country for the tournament.

The Danish soccer federation, known as DBU, said the two sponsors for the training outfits would refrain from exposure on the clothes and would instead carry “critical messages and markings.”

The federation added it would also minimize the number of trips to Qatar for staff and partners so “participation in the World Cup finals is primarily about sporting participation and not promoting the World Cup organizers’ events.”

“DBU has long been strongly critical of the World Cup in Qatar, but now we are intensifying our efforts and critical dialogue further, so that we take advantage of the fact that we are qualified to work for more change in the country,” Danish soccer federation managing director Jacob Jensen said.

The federation added that it will “continuously conduct due diligence” on its choice of hotel and other services in Qatar to see that labor rights are respected. It also said it would consider the possibility of new initiatives to improve conditions in Qatar.

In 2010, Qatar won the right to host the World Cup in a contentious FIFA vote that sparked corruption investigations into the entire bidding process. Evidence was not found by FIFA to warrant stripping Qatar of the hosting rights.

The natural gas-rich emirate has spent tens of billions of dollars to build hotels, a new transport system and lavish stadiums to cope with staging the event.