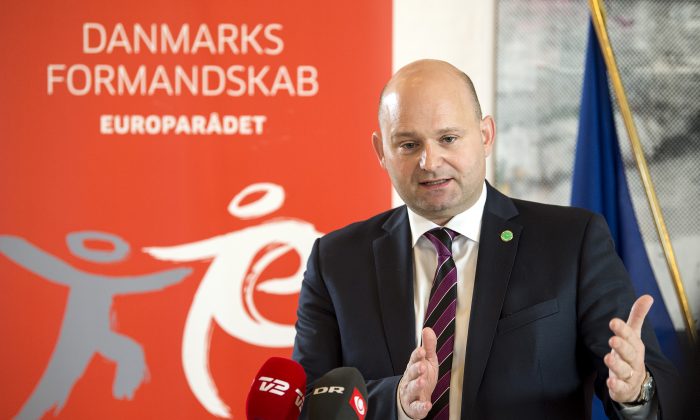 STOCKHOLM—The Danish government is planning to build a secure center on a small island for housing criminal migrants and other people without resident status who can’t be legally deported.

The plan, which was presented Nov. 30, means that a new “departure center” will be established on the island of Lindholm, which has only three permanent residents, and is currently the home of a veterinary research facility for testing animal viruses. Since the island is accessible only by ferry, these tested viruses aren’t easily spread to the mainland. Now, this restricted accessibility will instead be used to contain potentially troublesome migrants.

The plan is to move the research facility by 2019, and establish the center with a view to begin operations in 2021. The center will be able to host 100 residents, with a spare capacity of a further 25. It will also host staff and police officers.

The current center is situated near the town of Ikast in central Jylland (the Danish mainland). Soren Pape Poulsen, Danish minister for justice, said that many people in the area have felt unsafe because of the center, Tv2 reported.

“We are sending these criminal migrants to an island where there are no other people that can be disturbed by them,” Poulsen said. “This is good for a sense of security and for people who feel that these people cause a lot of disturbance.”

It’s important to note that the planned residents of the new center aren’t detainees—they are people who have served their sentence and are awaiting deportation, or people who can’t currently be deported to their home countries as they may face torture or execution. This also puts limits on how the government may house and monitor them. Human-rights lawyer Louise Holck told the Politiken newspaper that the conditions on the island will determine if this will become a human-rights issue.

“You can’t detain these people,” she said. “If the conditions as a whole are very strict, it may, in human-rights terms, amount to actual detention.”

So far, there has been no major opposition from the other political parties in Denmark to the plans, but the optics of housing non-detained migrants on an isolated island has raised eyebrows, both inside and outside of the country.

Jakob Thiemann, Social Democratic candidate for the European Parliament, warned of dehumanization in an opinion piece in Politiken, comparing the island to the notorious prison islands of Alcatraz or Robben Island in South Africa.

But the issue that has so far gained most attention is the projected cost: Some $115 million will be spent over the next four years on the plan, information.dk reports. And once the center is up and running, it will cost about $34 million a year, which means over $250,000 a year per planned resident, or $750 a day.

“Are there even hotels that expensive?” Social Democratic politician Mattias Tesfaye told information.dk. “We will look into this properly. It’s taxpayer money.”

The direct cost per migrant a year at the current facility is about $37,000, according to official figures from the Danish Ministry for Immigration and Integration’s press department, but the ministry adds that this doesn’t include the cost of preventative police work, whereas police costs are included in the figures for the new center, information.dk reported.

Inger Støjberg, minister for immigration and integration, defended the costs, and said that the facility is meant to also have a deterrent effect, Tv2 reported.

“It’s not supposed to be nice, coming to a departure center,” she said. ”If you are being expelled or not granted residency, this is not a place you will want to stay in.”