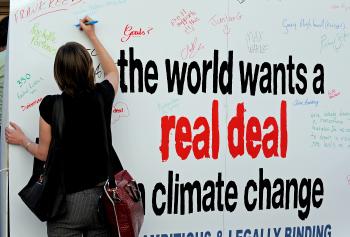 A climate action activist signs a large placard alongside a gathering of other activists on the Sydney Town Hall steps for a silent 'Vigil of Hope' on Dec. 11, 2009. (Greg Wood/AFP/Getty Images)
International

After a day of heated debates between 193 world delegates in the Danish capital Copenhagen, there seems to be a will for compromises on the part of biggest emitters—the United States and China. However, the desired goal of keeping a rise in temperature below 2 degrees Celsius might not be achieved, according to a leaked document from the U.N. climate convention secretariat.

The talks resumed on Thursday after a block of 24 hours, caused by poor countries’ disagreement with the compromise texts proposed by Danish Prime Minister Lars Lokke Rasmussen.

U.S. Secretary of State Hilary Clinton declared a willingness to cooperate with other countries and to mobilize $100 billion per year by 2020, in order to aid developing countries.

U.S. President Barack Obama, whose country is the second biggest gas emitter in the world after China, is expected to arrive in Copenhagen Friday morning. Earlier he proposed 3 percent to 4 percent lower emissions by 2020 than in 1990, which is also 17 percent lower than 2005 levels.

The United States said they will not agree to concrete gas emissions cuts unless China follows suit. The United States urged the Chinese regime to act in a “transparent” way, but the latter ignored the request, with the motivation of “not accepting any intrusion in the sovereignty” of China.

German Chancellor Angela Merkel said that “If each and everyone does a little bit more, then we can do this,” Reuters reported, and added that the European Union has the will to act but not alone.

The European Union committed $150 billion as a global fund. Its obligations are to cut by at least 20 percent of its gas emissions against 1990 levels.

French President Nicolas Sarkozy stressed that, “A failure in Copenhagen would be a catastrophe for each and every one of us,” and urged world leaders to leave behind posturing.

Sarkozy hinted that France could agree on extending the deadlines stipulated in the Kyoto Protocol, where developed countries are obligated to cut gas emissions until 2012.

During his speech at the summit on Thursday, Australian Prime Minister Kevin Rudd said he feared “a triumph of form over substance” at the end of the talks in Copenhagen, BBC reported.

Japan promised to assist poor countries with $15 billion payable within 2010–2012, if a deal is made.

Another aid might come from a group of six developed countries—Australia, France, Japan, Norway, the U.K., and the United States, which plan to secure a total of $3.5 billion to fight deforestation during the next three years to come.

India, which is among the greatest polluters, said it is aiming to curb emissions of CO2 by 20 to 25 percent by 2020 against their 2005 levels, but declined categorically to bind itself with concrete figures.

What if No Deal

As a possible deal requires unanimity, it is hard to expect so quick of a deal despite the fact that the discussions started in 2007. But Sarkozy warned that if no firm agreement is reached in Denmark, the summit should at least fix a deadline for signing a real treaty by mid-2010 at the Mexico summit.

Countries still cannot agree which should cut by what percentage its greenhouse gas emissions due to their interests.

Poor countries, especially in Africa, are at greatest risk from the effects of global warming, while their emissions are small compared to the developed world. That is why they hold to the Kyoto protocol and are not willing to accept compromises.

According to the draft texts, world greenhouse gas emissions should be halved by 2050, which means developed nations should curb their emissions by 25percent to 40 percent by 2020.

On the other hand, developing economies are expected to bring almost all future growth in carbon emissions.