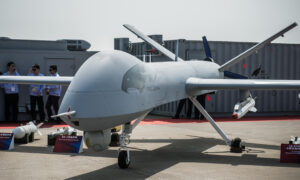 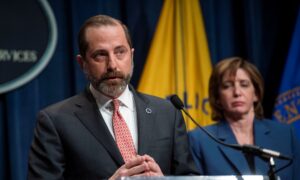 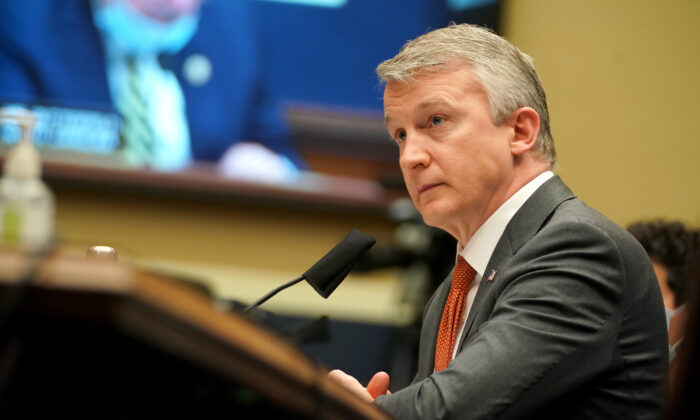 Dr. Rick Bright testifies before the House Energy and Commerce Subcommittee on Health in Washington on May 14, 2020. (Greg Nash/AFP/Getty Images)
Trump Administration

A scientist who filed a whistleblower complaint, alleging that his demotion and transfer from a high-level government post was motivated by political retaliation, testified before members of Congress on May 14 as the department he worked for protested his claims.

Dr. Rick Bright warned lawmakers that the Trump administration lacks a proper plan to respond to the COVID-19 pandemic, claiming that Americans are “being paralyzed by fear, stemming from a lack of a coordinated response and a dearth of accurate, clear communication about a path forward.”

“Without proper planning, 2020 could be the darkest winter in modern history,” he told the House Energy & Commerce Subcommittee on Health in Washington, calling on officials to let scientists lead the response.

Bright recently headed the Biomedical Advanced Research and Development Authority, an office inside the Department of Health and Human Services. He’s alleged political retaliation for opposing an expanded rollout of hydroxychloroquine and chloroquine, two drugs approved for use for several ailments, against COVID-19.

“We want to make sure that the drugs we consider are safe and effective. Many of these reports we had are anecdotal evidence,” Bright said, referring to the widespread off-label prescription of the malaria drugs by doctors, some of whom said the drugs were effective.

While some studies have shown hydroxychloroquine and chloroquine have side effects, including heart issues, the medicines haven’t been confirmed to cause death. Emerging evidence indicates hydroxychloroquine works best when combined with an antibiotic and zinc.

Bright also pushed the administration in February to acquire stockpiles of remdesivir, an experimental treatment that lacks proof of efficacy against COVID-19 outside of studies from China, and obtain personal protective equipment and other items he felt weren’t adequately available in the Strategic National Stockpile.

The agency “strongly disagrees with the allegations and characterizations in the complaint from Dr. Bright,” a Department of Health and Human Services (HHS) spokeswoman told The Epoch Times.

Bright, who makes $285,010 a year, still hasn’t shown up for work at his new position at the National Institutes of Health, the HHS said in a lengthy statement issued around the time Bright began testifying on May 14.

Bright continues to collect his salary “while using his taxpayer-funded medical leave to work with partisan attorneys who are politicizing the response to COVID-19,” the release stated. “His whistleblower complaint is filled with one-sided arguments and misinformation.”

The department says Bright pushed officials to secure doses of chloroquine and hydroxychloroquine and asked for emergency use authorization so the doses could be distributed for use.

Bright told lawmakers that there was “limited data available” at the time and that he only wanted the possible treatments approved so they could be used in clinical trials.

When the administration moved for use broader than he wanted, he voiced objections, which he believes led to his ouster.

Hydroxychloroquine, the less toxic form of chloroquine, has become a political touchstone for many after President Donald Trump said COVID-19 patients should take it. Because it’s approved by regulators for use against malaria, lupus, and other ailments, patients had “nothing to lose,” Trump said at a press conference.

Critics quickly rejected the recommendation, citing the lack of rigorous trials testing the drug against COVID-19.

There are no proven treatments against COVID-19; a number of candidates are being examined in studies and trials.

Bright spoke of struggles to warn administration officials of shortages and improper methods in the pandemic response but HHS said Bright’s role was limited so he was unable to see the work being done by superiors, including HHS Secretary Alex Azar.

“Even today, Rick Bright is still missing the bigger picture,” the department said, noting measures that include Operation Warp Speed, a project aimed to shorten the time it will take to develop a CCP virus vaccine.

Bright didn’t testify under oath because he said he was testifying as a government employee in his personal capacity, a point driven home by Republicans who expressed confusion about the unusual nature of the hearing and who wondered why more pressing issues weren’t being judged.

Subcommittee Chairwoman Anna Eshoo (D-Calif.) downplayed questions in recent days about her links to Bright and the agency he had led, after critics pointed out she helped create legislation in 2006 to form the office, which has since awarded contracts amounting to hundreds of millions of dollars to businesses in her district.

Ranking Republican member Michael Burgess (R-Calif.) in a letter this week asked Eshoo for details about the hearing, which was scheduled with less notice to lawmakers than usual. Eshoo responded that the hearing would help lawmakers “better understand” what happened in the early days of response efforts against the new virus.

“With lessons learned, we can move forward to save lives,” she wrote.

As Bright testified, one of his lawyers, Debra Katz, sat beside him and spoke on occasion. She was on Capitol Hill two years ago helping represent Christine Blasey Ford, who had accused then-Supreme Court nominee Judge Brett Kavanaugh of sexual assault when they were teenagers, a claim he denied while she provided no corroboration; he was narrowly confirmed to the Supreme Court after a contentious Senate hearing.

The watchdog office that received Bright’s complaint last week said he should be reinstated during the investigation, according to his lawyers. The office declined to comment when contacted by The Epoch Times.